Matthew Rhys Had No Idea Who Mr. Rogers Was Before A Beautiful Day in the Neighborhood 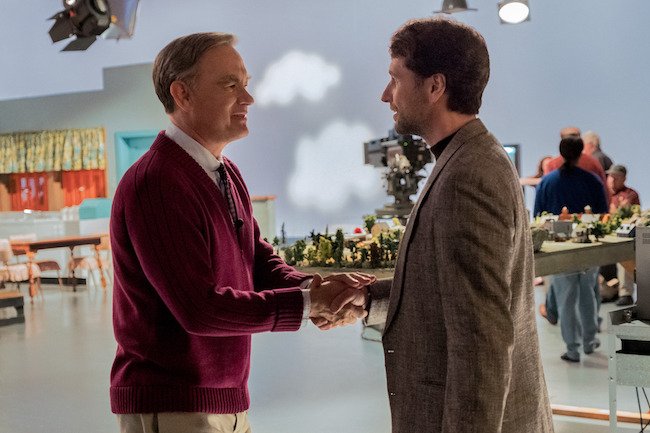 People pause when they speak for all sorts of reasons: for dramatic effect, because they forget they wanted to say, or—sometimes—because they want to remember what’s been said. Learning to revel in the silences was essential to Matthew Rhys as he starred in A Beautiful Day in the Neighborhood, in which Tom Hanks co-stars as Mr. Rogers.

Rhys plays Lloyd Vogel, a character loosely based on real-life writer Tom Junod, who wrote a famed Esquire profile on Fred Rogers that helped inspire the film. But the Welsh actor had never heard of Mr. Rogers, an icon in American children’s television, until he got the script for the film. His wife and The Americans co-star, Keri Russell, quickly explained how much Mr. Rogers means to Americans.

In an interview with MovieMaker, Rhys said the role of Lloyd Vogel has led him to take more pauses in his own life.

Katherine Brodsky, MovieMaker Magazine (MM): Being Welsh, were you familiar with Mr. Rogers?

MR: Sadly, no. It was a big revelation to me that kind of started with Keri. When the script came through, I was like, “Who’s Mr. Rogers”? And she [screamed]: “What?! Get out!” And then she went into this deeper explanation of what he stood for to a number of generations, especially in the United States.

Also read: Why Joanne Rogers Didn’t Want a Saintly Portrayal of Her Husband

MR: The first time I watched it, I was like, what is going on here? These huge pauses that he takes… Is something wrong? Is he waiting for a cue or something? Partly because we’re a society that just expects [a fast pace], and then you realize the psychology he had about the pauses that were incredibly placed, that he truly believed children needed time to absorb and to process. So he had this very measured tempo to show where they take it in and process at the same time. He was so ahead of his time, in that respect. And I kind of began to fall in love with his demeanor. It’s so intricate, what he’s doing. And so, so magic. He was a pioneer in his time.

MM: Silence is an interesting thing. In journalism it can be used as a technique because silence can make people uncomfortable, but then they end up talking in ways they didn’t intend to.

MR: It’s funny, the first time you work with a publicist, they tell you that the journalists might hold pauses in order to invoke you to speak. What was interesting talking with Tom Junod… because he was so embedded with people when he would do long-form articles, he would profile them over days or sometimes weeks. And he said, my biggest weapon was time, because I always knew I had the time. However hard or deflective someone was, I knew I had the time to get to them. But with Fred, it was a war of attrition. They out-paused each other. But Fred had this thing they called Fred Karate where he would deflect in a very deft way. Not just blatantly answer questions with questions, he’d round it so that Tom would go: “Hang out, he’s interviewing ME, he’s done it again!” So yes, you had the battle of the great pauses in their meeting.

MM: I was sort of shocked that Tom was getting to actually fly out and meet Fred to do what was supposed to be a 400-word story. That doesn’t happen now.

Also Read: Where That Navy SEALs/Sniper Urban Myth Got Started

MR: Back in the day, he’d spend an inordinate amount of time with people. He spent over a week with Fred. And [Tom] really got to spend time with people where their guard is ultimately dropped. But [spending time with Fred] at the end of these six days or whatever, there was just this giant mirror looking back at him. He prided himself as someone who would approach an interview from a fairly psychological point of view in order to try and better know them and I think Fred kind of went: You don’t really know yourself, so how can you do that?

MM: Another thing that was quite special about Fred is that he didn’t shy away from talking about difficult things with kids — usually people just want to make everything OK and cheer you up if you’re feeling down.

MR: Especially in this day and age—that kind of the deflection, or the immediacy of reassurance, which you realize now is kind of pointless. And that’s what I love about Fred. His whole thing was about process, accept, understand, move on. He was giving kids this toolset where they could deal with these enormous things that touch their lives, like divorce or war or any type of fear, insecurities, bullying — these huge themes that touch children. And his whole thing was that you have to do it, you have to go through it. That’s what he did with Tom. At some point he went: It’s about your dad.

MM: How did he know?

MR: I think just through days of small little questions. He was this great detective, getting to know what was at the root of things. Looking back, his mandate of what it was to guide children through things was incredibly progressive, so ahead of his time. Still, there’s no one… helping kids the way he did. Not the deep dive he did. There’s someone going, yes, it’s scary. It’s okay to be scared. Now figure out how to deal with it. Because by the time you get to adulthood, you’re kind of done. It’s locked.

MM: People obviously responded well to Tom Hanks being cast as Mr. Rogers due to his lovable nature, but what would you say are the biggest differences between them or how they approach things?

MR: It’s strange, the lives we lead as entertainers, it becomes a very natural instinct. One: to entertain, but also to put up the protective barrier. I mean you can see him, he entertains the room very, very easily. And I think Fred’s big thing is to always sit and watch. Like you touched on, to live in the silence. I think as actors our whole thing is to fill the silence. But when you’re acting, you’re allowed to [have the silence], there’s that permission because it’s not us. Ultimately I always feel like I’m hiding because it’s not me, I’m pretending to be someone else, so I’m allowed. But I certainly don’t have the bravery to do it in real life. I’ll usually fill the void.

MM: Is the American accent a part of that freedom when you’re acting?

MR: In a way, it’s a further tool of distancing. I’m not really myself, I’m someone else. It’s the liberating aspect of acting. I get to do things I certainly wouldn’t do myself. But it’s a further barrier, which is great in a way, but it also hinders in others.

MM: Have you taken anything away from this experience of learning about Fred? Were you cynical about it?

MR: I wasn’t even a glass half-empty [person]. There was no glass. As a father of a young child, I’ve taken a deeper delve into Fred and kind of gone, ‘Oh, he really helps parents as well.’ I’ve tried to take what his philosophies were about kids and not getting as quickly frustrated with my own child is as I might ordinarily have done. To try and view things from their point of view. That’s been a great takeaway for me.

MM: The movie suggest that Fred Rogers is maybe not a perfect person—he just tries. But at the same time, since the story is told from your character’s point of view, it creates some sort of distancing that keeps him still a bit mythical. What do you think about that?

MR: One of the things I love about him is that he is ardent in saying, we are fallible, we do make mistakes. It is hard, it is scary. I’m not a saint. As soon as you make [someone into a saint] it’s a distancing tool that religion uses. Being human is difficult, but what you have to do is talk about it and go through it. And that’s hard, but then it makes everything else easier. It ultimately makes things easier if you can do that. And it’s funny because there’s all that kind of dichotomy between the journalist and Fred. The journalist thinks that he’s kind of the one present and interviewing and seeing, whereas ultimately the silence of the slightly stranger person is the one who’s truly the seer.

MM: Did you talk much with Tom Junod?

MR: Yes, very much so. It was a big key for me into it and there’s a lot of Tom in the movie, obviously, but he’s become that way [as a result of his experience with Fred]. He says, he’s 180-ed my life and he’s become the open one. He’s incredibly open as a result and he’s really taken on Fred’s teachings in life. He said he was a different journalist prior.

A Beautiful Day in the Neighborhood opens Friday.