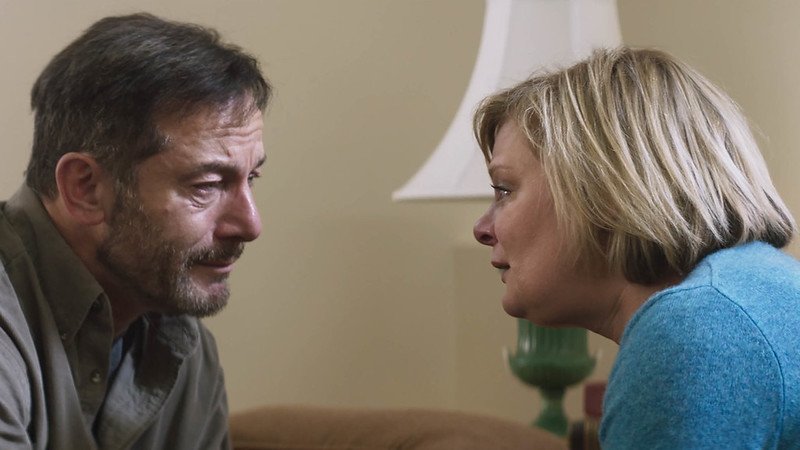 At the end of the Sundance Q&A for Mass, a festgoer asked the four lead actors and writer-director Fran Kranz how the group decompressed from the film’s serious subject matter surrounding the aftermath of a school shooting.

Reed Birney and Ann Dowd star as couple whose son commits a mass shooting, while Martha Plimpton and Jason Isaacs had a kid who was killed during the shooting. They meet for an intimate reconciliation session at a Episcopal church. Most of the film takes place in real time in a single room in the church.

Mass is difficult but essential viewing. Two participants fought back tears within the first few minutes of the Q&A.

However, it may surprise viewers to learn that laughter and levity was key to keeping things in perspective on set.

Plimpton explained, “First of all, we had two of the funniest human beings on the planet in Reed Birney and Ann Dowd. Jason is a close second. We did a lot of laughing during the filming.”

Birney jumped in saying, “between takes even, it’d go between laughing and sobbing.”

Plimpton added that “none of us are one of those actors who ‘need a minute.'” As professionals they were able to jump into character within a moment’s notice.

However it wasn’t always easy and Jason Isaacs admitted to certain difficulties. “The thing I found hard was that everything that happens in the room is about what happened before we get to the room. It’s about everything that’s happened to Jay and Gail in the intervening years.”

But the aforementioned humor was key. Plimpton added, “I hate to say this, because it doesn’t make sense, but we had a lot of fun. And I think that’s why this process stays with us and stays in our minds as a joyful experience.”