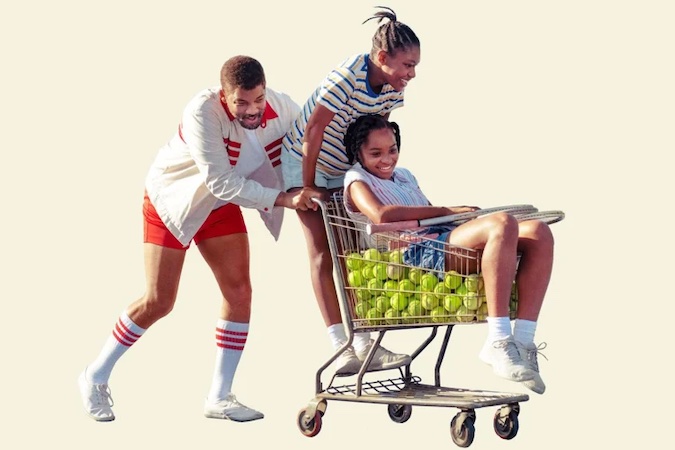 Magic Johnson gets a docuseries that should be even better than Michael Jordan’s; meet the 14-year-old playing Serena Williams in King Richard; how a 37-year-old grizzly movie starring George Clooney and Laura Dern got a second chance. All in today’s Movie News Rundown.

But First: Can you sign up for this here newsletter you’re reading, if you haven’t? It helps us.

Playing Serena Williams: Margeaux Sippell has this interview with Demi Singleton, who plays Serena Williams in the upcoming film King Richard, about how Venus and Serena William’s dad led his daughters to greatness. Singleton, already a Broadway and film veteran at 14, seems destined for greatness herself.

Magic Johnson: I can remember exactly where I was the first time someone told me that Magic Johnson was HIV positive — one of the most staggering moments of a Los Angeles childhood. (High school, by the lockers.) So I’m incredibly eager to see the new Apple+ four-part series about the Lakers star’s life before and after his diagnosis, almost exactly 30 years ago. The Hollywood Reporter has details, including the news that Rick Famuyiwa (Dope) will direct.

Clarification: That Dope in parentheses refers to the name of his best-known film — not me saying “Dope!” as in “rad!,” both of which were words used by me and my ’90s high school friends that we still look ridiculous saying today. Speaking of, do you know how excited high-school me would have been to learn that Magic is still going strong in 2021 and leading a chain of great movie theaters? Dope!

The Last Dance: I’m sure the terrific, Michael Jordan-sanctioned doc about the last season of the Michael Jordan Chicago Bulls helped fuel interest for the Magic Johnson doc, but to me, Johnson’s story is even more compelling. Also excited for Adam McKay’s upcoming HBO series about the ’80s and early ’90s “Showtime”-era Lakers.

Comment of the Day: Here’s Tom Peterson, commenting on our fun facts about Robert J. Oppenheimer, the father of the A-bomb who is the subject of Christopher Nolan’s next film: “Another fun fact, Oppenheimer was one of the bettors at Trinity Site (where the first atomic bomb was detonated in New Mexico). The bet: 25 cents that that bomb would ignite the atmosphere and engulf the world, destroying mankind. Why 25 cents? The winners wouldn’t be around to collect. I never heard what side of the bet he was on, but I had the good fortune to work with two of the scientists who where there – they both swore they were on the side that said it wouldn’t happen.” Caveat: I personally can’t find corroboration for this story myself. But it sounds like a great thing to put in a movie, if you happen to be reading this, Christopher Nolan.

King Richard Trailer: Does anyone else get “they’re definitely gonna give this Best Picture” vibes? It looks like exactly the kind of movie the Academy wants to celebrate and everyone I know who has seen it has loved it. Can’t wait to join them: