More Than a Statistic: Rape Scenes Require Sensitivity and Realism, Says the Director of The Light of the Moon

I am not sure if I can pinpoint the exact moment when I became acutely conscious of the way rape is depicted on the big and small screens. I assume it was a gradual buildup of awareness, which quickly boiled over to utter infuriation.

I do remember starting to fixate on every directorial decision made in regards to filming such scenes: How is this relevant to her character or the plot? Why did they move the camera down there? Is this a sex scene or a rape scene? Did they appropriately prepare and protect the actors and the crew for this? Now that’s just bullshit. The uncomfortable knot in the pit of my stomach—the one that serves as an amber warning light for when I can’t quite put my finger on the problem, but I know that something isn’t quite right—became increasingly impossible to ignore, until the point I decided to do something about it.

Now, I should preface, I’ve been a cinephile from a childishly young age and have never had a problem with witnessing violence in films or on television, as long as I feel it serves the story’s purpose or is in line with the overall artistic direction of the film. I’m not prudish or squeamish. I like my cinema to challenge me and take me outside of my comfort zone, (something that I also try to achieve as a writer-director). All that to say, I think we all agree that sexual violence against women is in an entirely different league of violence—both on and off screen—and it should be treated as such.

I started to do some research. I checked the credits of almost all the films that portrayed sexual assault, and my gut instincts were quickly confirmed: The vast majority of these films (upwards of 95 percent) are written and directed by men, arguably, for the sole consumption of men. Furthermore, almost every single rape scene in the history of cinema was filmed by a male cinematographer. Now that fact really sent me over the edge. Cinematography is literally the “gaze” of the film, and there is no way to avoid the “male gaze” with a male cinematographer attached. His “gaze” is intrinsically a part of who he is and will inevitably spew out onto the screen, whether overtly or subconsciously. This knowledge made an even more disturbing line of questioning creep into my mind: What are male artists trying to say about women, and violence against women, through their depiction of rape? Are they trying to fetishize it it? Mystify it? Denounce it? Explore their own perverse violent fantasies? Dominate and “abuse” women actors and characters through the safety of the lens and pass it off as “art”? Or perhaps, even more disconcerting than any personal and egotistical satisfaction, are they trying to justify (and potentially exacerbate) rape and rape culture within real life?

Stephanie Beatriz and Michael Stahl-David in Light of the Moon. Image courtesy of Imagination Worldwide

We all know there are multiple aspects wrong with the way rape is currently overused and warped by the media. Sexual assault is often merely a glossed over plot point or added as a backstory device to make a woman’s character more “complex,” because, according to Hollywood, sexual assault is the only way to make a woman character “interesting.” The act and aftermath are often portrayed gratuitously (Game of Thrones) and quite often, are filmed from the perspective of the rapist (Game of Thrones). The scene is filmed like a sex scene, almost as a means to add “grittiness” or “sexiness,” and I feel the endless amounts of “rape scene montages” on YouTube are evidence enough about the interpretation and affects of such scenes. Entire rape plotlines are added to historical films for no necessary reason (Birth of a Nation). The psychological impact on the victim is often not even spoken about by the characters or explored in the plot of the film (“insert innumerous horror films here”). Often justice and/or revenge will be served against the perpetrator, whether by killing them (Kill Bill), raping them (Girl with the Dragon Tattoo) or throwing them into prison (The Accused). And as satisfying as a rape-revenge film may be, it is an overwhelmingly well-trodden storyline and one that is as far-fetched from reality as humanly possible. Even in Paul Verhoven’s Elle—an incredibly nuanced film with a focused and complex storyline, (which heralded one of the most enthralling performances of 2016 by Isabelle Huppert)—the protagonist still serves justice to her rapist in the end. I am not saying these stories are not relevant and/or satisfying, but if part of art’s purpose is to reflect life—and considering how much Hollywood covets the “based on a true story” byline—then why are we not representing the vast majority (over 98 percent of rape survivors) who never see any justice served against their perpetrator? And why are we not showing the aftermath of what that statistic means to the survivor’s reality?

The overuse and alarming misrepresentation of rape in the media is only to self-serve the male writer, director, cinematographer, and audience members’ own desires, and not to accurately represent or empower the woman victim/survivor. Essentially, by exemplifying these unrealistic plotlines and distorted depictions, Hollywood is perpetuating the culture of victim-shaming-and-blaming by putting the onus on the victim to serve justice to her perpetrator. But what about a feminist approach to telling such a story? And what about actually serving our women audiences, who comprise the majority of the ticket sales?

These are largely the reasons that I felt compelled to make my first feature film The Light of The Moon, about a successful New York City architect who is assaulted during an evening out with her friends. It is a realistic and raw portrayal of the six weeks following the assault and how it impacts her life, relationships, and career. 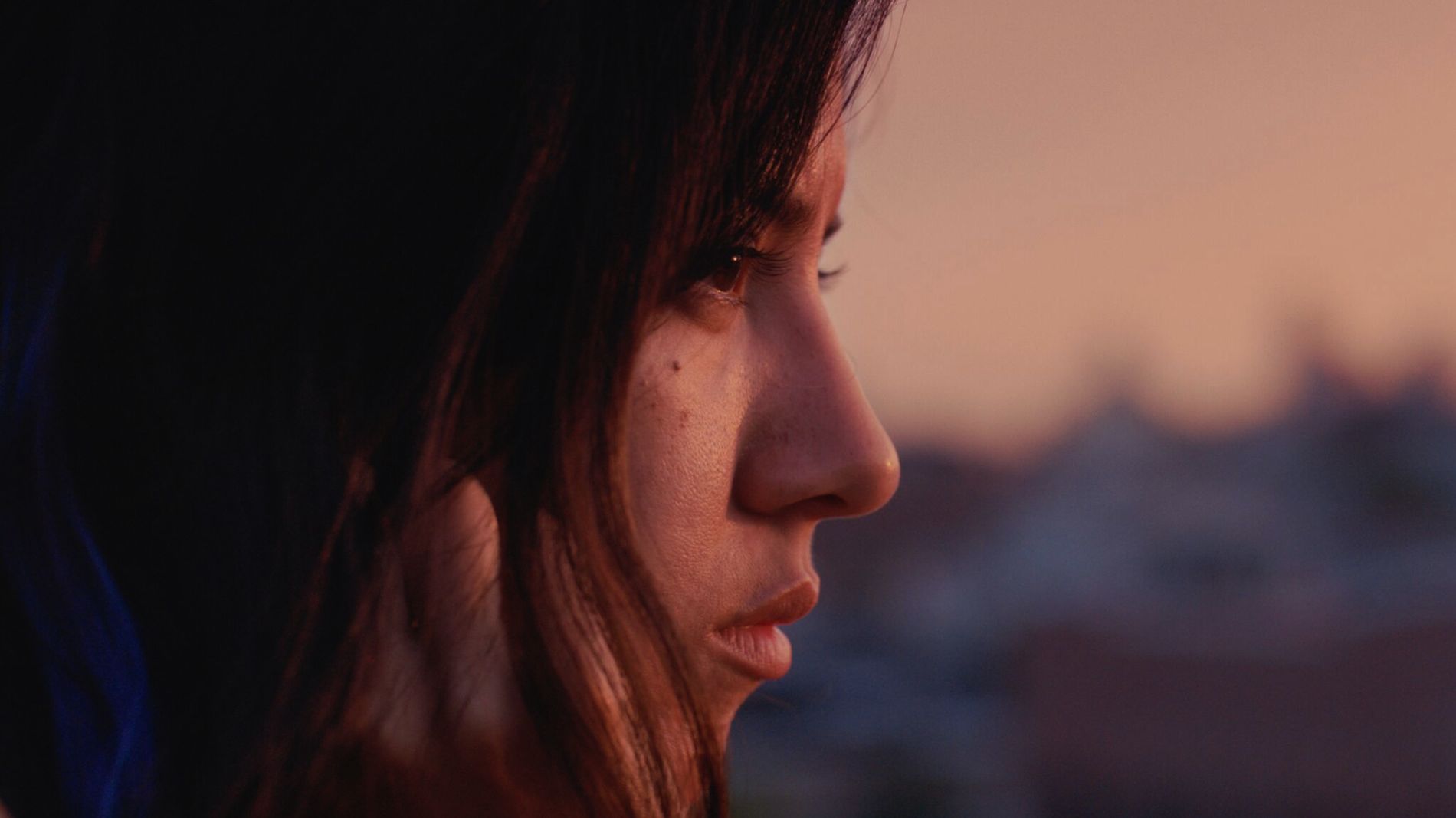 Beatriz in The Light of the Moon

I went down a rabbit hole of research. I spoke to several assault survivors, attended seminars, spoke to medical professionals, examining doctors, social workers, anti-violence organizations, and even learned how to administer a rape kit myself. In my research, I discovered all of these facts that I had not seen explored in other films on the subject matter. For instance: during the rape, a common survival mechanism kicks in and the majority of victims have an out-of-body experience, so whether you do or do not fight back is often beyond your control (despite what the media and authorities may suggest); you always distinctly remember the first thing someone of authority says to you afterwards, (and unfortunately, it usually is not a positive reinforcement); after reporting the rape, whether or not you have any physical injuries, you have to strip down so that the examining doctor can take pictures of your body to use as evidence, you then hand over all of your clothes, including your underwear, and go home in random clothes supplied by the hospital; you have to take HIV prophylaxis medication for three-six months afterwards (which makes you feel dizzy and nauseous), and you usually get injected with several vaccinations as a precautionary measure; you are often ‘forced’ by the police to go back to the crime scene that same evening, so the site does not become disturbed or contaminated and cause the evidence to be thrown out in court (though less than six percent of cases actually go to court); a majority of rape victims move houses or change jobs within the first year of recovery, due to not feeling safe in their surroundings or supported by their job; and the first time having consensual sex afterwards is always difficult and often creates issues within an otherwise healthy relationship.

After hearing all of these facts and personal accounts, I felt compelled to tell an honest and fair story through the perspective of the survivor. That is not to say that The Light of the Moon is every rape survivor’s story, but it is a story that I feel deals with rape and its aftermath sensitively and realistically.

A large decision in my filmmaking process was to hire Autumn Eakin as my director of photography. To my knowledge, this is the first feature film to depict a rape-scene written, directed and DP’ed by all-women. (That sentence seems impossible to be true, but I fear that it is). Autumn and I discussed the rape and sex scenes extensively, to ensure we were always focusing on and identifying with Bonnie (our protagonist) the entire time. Another big filmmaking decision was the complete empowerment of our lead actress, Stephanie Beatriz (Brooklyn Nine-Nine), throughout the filmmaking process. Unfortunately, it appears to be somewhat common (and despicable) practice for directors to not consider the sensitivities of their lead actors while filming these traumatizing scenes (as with recent revelations made about Bernardo Bertolucci and Marlon Brando while filming Last Tango in Paris). I had clear and completely open communication with Stephanie at all times, to ensure she was always comfortable with each decision being made. She told us what day she would like to film the rape scene (in the middle of the 16-day production) and we ensured it happened and built the rest of the shooting schedule around her request. We had a fight consultant to coordinate the scene safely. The actor who played the rapist was a dear friend of mine who I trusted immensely, and I ensured that his main focus was Stephanie’s well-being. I gave all the actors private “safe words” that they could tell me if they ever felt uncomfortable or needed a break. We had a strictly closed set for both the rape and sex scenes, and only included people in the room who Stephanie chose to be there.

As a director, my main responsibility is to my actors. They are my most valued collaborators and the most precious tools that I have to tell the story, and thus, their needs are always my main focus and concern. As a result, by creating a comfortable, sensitive and empowering set environment, I allow my actors to trust and explore their instincts freely, and what results, I feel, is a much more naturalistic style of storytelling.

Considering one in five women experience sexual assault—and some organizations believe that statistic is actually closer to one in three—I think it is fair to say that all people will be directly or indirectly impacted by rape in their lifetime. As such, we need to be doing a much better job of reflecting the harsh realities of sexual violence and its rippling effects on individuals and our society. My advice, if you are a male writer, director or cinematographer, ask yourself: Is this necessary to show? Why am I putting this scene in the film? Does it hurt or hinder the actor/character? Is there another way to show this? Have I empowered my actors and made them feel safe? Am I the right person to be telling this story? And most importantly, will this portrayal help to diminish or to exacerbate rape culture in our society?

Depending on how you answer those questions, I encourage you to act—or not act—accordingly. As filmmakers, we have a powerful and influential platform and we have a responsibility to use that power and influence wisely. MM

The Light of the Moon opened in New York November 1 and will open in Los Angeles November 17, courtesy of Imagination Worldwide/The Film Collaborative.

Things I’ve Learned as a Moviemaker: Rob Reiner
How They Did It: First-Time Director Ana Asensio Split Most Beautiful Island Into Two Stylistically Distinct Halves