Last Night in Soho, the hotly anticipated latest feature from Edgar Wright, stars Thomasin Harcourt McKenzie as a young woman who feels herself slipping through time to a dreamlike 1960s London— and interacting with a mystery woman played by Anya Taylor-Joy.

The first trailer, out today, is drenched in neon-lit atmosphere that hints at menace behind the throwback glamour. 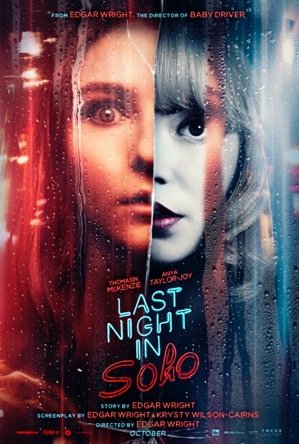 Thomasin Harcourt McKenzie and Anya Taylor-Joy in the poster for Last Nght in Soho, directed by Edgar Wright

“Edgar Wright’s psychological thriller about a young girl, passionate in fashion design, who is mysteriously able to enter the 1960s where she encounters her idol, a dazzling wannabe singer. But 1960s London is not what it appears, and time seems to fall apart with shady consequences…” reads a synopsis from Focus Features, which will release the film in theaters on October 22.

After Rigg’s death last year at 82, Wright remembered the Avengers and Game of Thrones star in a charming piece for The Guardian, writing: “What little downtime we had on set would invariably turn to me nudging her for the most brilliant anecdotes. After the shoot, this led to some cherished Campari-fuelled Sunday brunches in her favourite South Kensington spots where we talked about the state of the world, the business as it is now, and all of her stories in-between. She was such a wickedly funny raconteur, and though we gossiped a lot, I feel like I only heard five percent of her tales.”

Rigg was one of the most celebrated faces of the swinging 1960s scene recalled in the Last Night in Soho, as was Stamp, who once told The Guardian, “I was in my prime. When the 1960s ended, I just ended with it.” (Not so, says anyone who has seen Stamp since, especially in Steven Soderbergh’s 1999 The Limey.