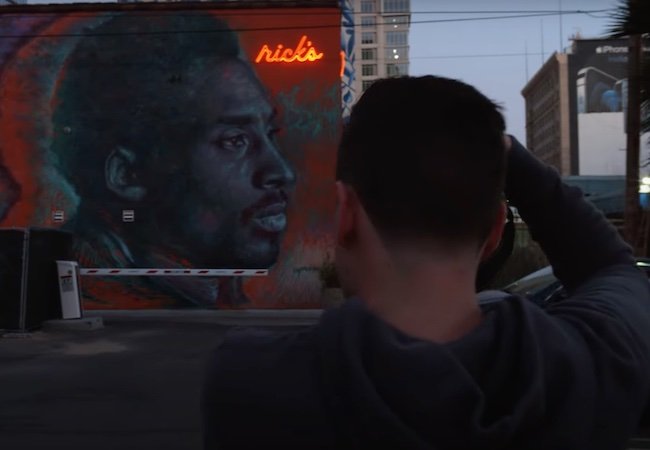 “When Superman dies, it’s like, who else do you look up to?” asks one of the subjects of director Patrick Green’s new documentary, Sincerely, Los Angeles, about Angelenos coping with the death of Kobe Bryant.

When Superman is Kobe Bryant, and you live in Los Angeles, you keep looking up to him — thanks to the artists who honor him with murals all over the city. Sincerely, Los Angeles tracks mourning Mamba fans who focused their energy and passion during the COVID-19 lockdown into art that celebrates one of the city’s most beloved residents. You can watch the new trailer here:

“As I took drives around town looking for toilet paper and picking up take-out, I kept seeing Kobe murals. These images brought joy to
me, reminding me of better times with friends, family, and Lakers Nation. I admired how the artists were able to channel our grief and speak for us by capturing Kobe’s memories that had filled our lives with so much happiness,” Green says.

He quickly sought out and interviewed the artists to tell their stories. Green sees Sincerely, Los Angeles as a time capsule of 2020, with its mix of tragedy and triumph. The film also features interviews with high-profile personalities from the sports and art world and everyday fans who commissioned Kobe Bryant murals.

Green has made documentaries before about sports and street art, and Sincerely, Los Angeles combines both. His film Bundini examined Drew Brown, Muhammad Ali’s divisive but beloved trainer. It premiered in August on Ring Magazine and will premiere internationally next month at 2021 Toronto Black Film Festival. His previous documentary, For Your Consideration, about two street artists and their viral Harvey Weinstein statue, premiered at AmDocs 2019, and is now streaming on Amazon Prime and Tubi.

Sincerely, Los Angeles, presented by Someone Great Pictures, will be released later this year. For updates, you can visit sincerelyla.com and follow @sincerelylosangeles on Instagram.

Best Places to Live and Work as a Moviemaker, 2021
Kristen Stewart Stars as Princess Diana in Spencer