Jonah Hill Spent an ‘Entire Day’ Coming Up With Insults on Set of Don’t Look Up, Jennifer Lawrence Says 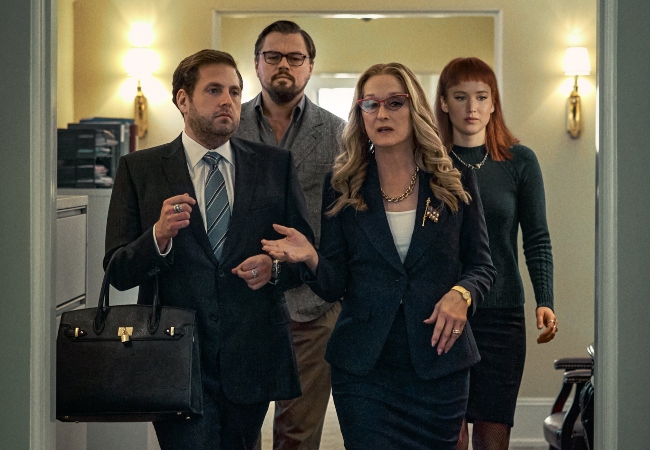 By now, you’ve probably heard all about the fart machine that Jonah Hill used as a prank during press for Adam McKay’s killer comet comedy film Don’t Look Up. But did you know that Hill spent an “entire day” on set just coming up with funny insults for his character to use?

His co-star Jennifer Lawrence revealed that fun fact at a Q&A she attended with McKay and fellow cast members Leonardo DiCaprio and Meryl Streep following a screening of the killer comet comedy at the Regency Bruin Theater in Westwood before the film’s Dec. 5 release on Netflix.

“We did have an entire day that was just spent on him [Hill] improv-ing insults. And that was the best day of my life,” Lawrence told the crowd at the event.

In Don’t Look Up, Hill plays Jason Orlean, the sharp-tongued but generally useless son of Streep’s President of the United States. Lawrence plays Kate Dibiasky, a grad student who discovers a planet-destroying meteor hurtling towards earth and shows her professor, DiCaprio’s Dr. Randall Mindy. Together, they make it their mission to warn everyone about their impending doom.

Lawrence also gushed about how much she enjoyed watching Streep do improv on set of the movie.

When Streep was asked whether shooting the comedy film was particularly challenging in any way, she deadpanned: “What was challenging was working with Jonah Hill.”

Cue laughter from everyone in the theater. (Of course, she was joking).

“I have a problem with corpsing,'” Streep said, referring to the British slang term for accidentally laughing when you’re supposed to be straight-faced. “When people try to make you laugh in a scene… I don’t have any control. So it’s really hard for me.”

“She’s really good at it,” Streep added, looking at Lawrence, who modestly demurred. But Streep insisted: “Yes, he [Hill] went after you like a demon!”

Oh, what we wouldn’t give to see Jonah Hill try to make Jennifer Lawrence and Meryl Streep laugh behind the scenes.