Kurtis Spieler is the “re-director” of New York Ninja — as he explains below. The revived ’80s action film, shot in New York City (of course) in the early 1980s, is out now on Blu-Ray.

I never thought of myself as an editor. Hell, I’m not even sure I consider myself one now.  Like many people in this industry, I set out to be a director.  I guess I can call myself a director, considering I have directed three low-budget feature-length horror movies, as well as several shorts. But, I’m not here writing this article as a director…I’m here writing as an editor. Which brings us to New York Ninja.

New York Ninja was a movie originally shot in 1984 — but due mostly to budgetary issues, the movie was never finished and was subsequently abandoned. Fast-forward about 35 years or so, and all of the original unedited 35mm camera rolls for New York Ninja were acquired by the wonderful company Vinegar Syndrome. 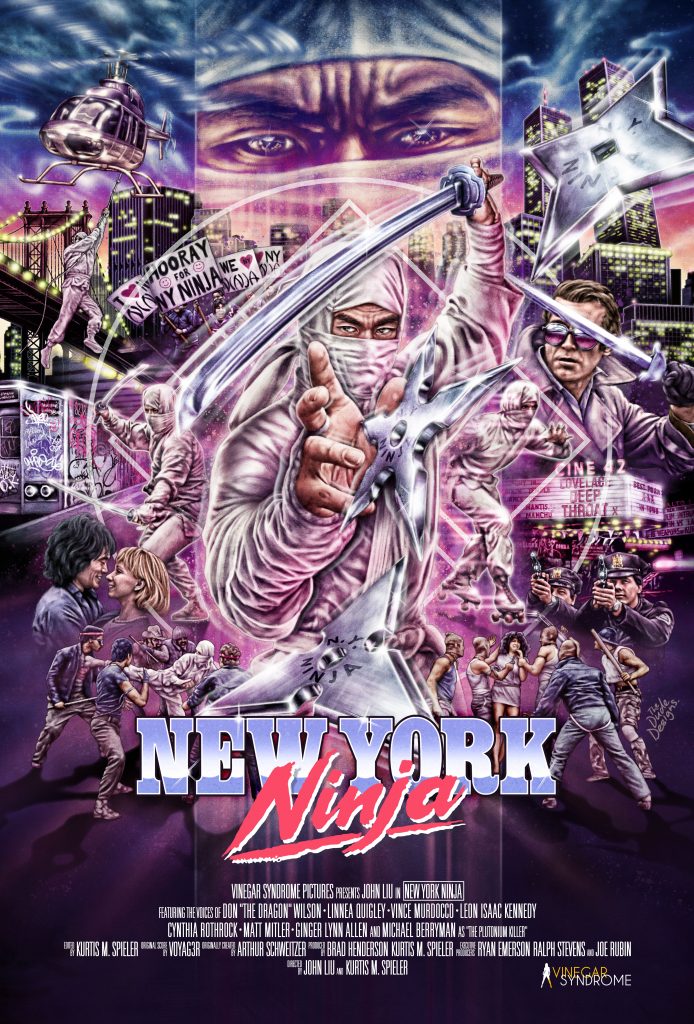 The poster for New York Ninja, directed by John Liu and re-directed by Kurtis Spieler.

Vinegar Syndrome is a film preservation company that specializes in restoring and re-releasing films (mostly genre films) from the ’70s, ’80s, and ’90s.  I started working for them in 2018 and fell in love with the restoration process.  There’s just something so cool about working with film.  Once I started working for Vinegar Syndrome, I found out that they had all of the raw footage for New York Ninja in its film archive, and I became very excited.

The film was among a large group of other movies that were acquired from a now-defunct production company called 21st Century Distribution. The owners of Vinegar Syndrome weren’t sure what to do with the film, but they knew they couldn’t just get rid of it. So one day, I approached them and asked if they would be willing to give me a budget to try and finish the movie.

No one in the building even seen a single frame of film, and unfortunately all of the sound elements had been lost to time. I pitched the idea of letting me try to edit the movie together, and then bringing in some of our favorite genre actors to dub the voices.  Being a restoration company, VS loved the idea and gave me the green light. 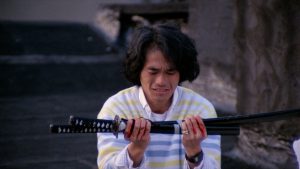 A ninja confronts his destiny in New York Ninja, re-directed by Kurtis Spieler.

I knew it was going to be challenging, but I had no idea what I was really getting myself into.  I began by going through all of the raw footage and using the information on the slate to separate each shot and then organizing shots by their corresponding scene numbers.

I then did a rough edit of each individual scene to try to get an idea of which scenes were finished and which weren’t. Throughout this process, I took notes about what I thought was happening in each scene, to try to get a rough idea of the structure of the movie.

The story didn’t seem to be too complex: It was a simple vigilante/revenge film, but there were so many crazy scenes, with both intentional and unintentional humor, that it was hard for me to determine what the tone was originally intended to be. Once each scene had a rough cut, I laid them down on a timeline in the order of their scene numbers.

But when I did this, the movie didn’t make any sense. Was this because the movie wasn’t finished being shot? Or was it just bad filmmaking? Or both?

At this point, that I knew the only option was to cut my own version of the movie, using the available footage.

Up until New York Ninja, the majority of my editing was done more out of necessity rather than desire.  Because my previous movies were made on such low budgets, I wrote, directed, and edited them myself.  This was done mostly to save money, but also for me to learn.  There’s nothing like getting into the editing room to find out what works and what doesn’t work. I suggest that anyone who wants to  direct should also learn how to edit.

The editing room is the place where you see all of the mistakes you made on set and it helps you learn to make better choices on your next movie.

All of those years I spent trying to fix my own mistakes, I didn’t realize I was building skills that could help me fix other people’s mistakes.  Now that I was working on New York Ninja, those skills started to come in handy.

When I first approached this movie, I imagined myself being an editor back in the ’80s. I imagined a producer bringing me this movie, saying that the production failed, and I had to fix it. So, that’s what I did. I went to work fixing problems, making scenes work the best I could, and trying to make as much sense as I could out of this mess of footage. Not only did my editing skills come into play, but also my writing skills. All my previous movies were also written by me, to help control the budgets from the beginning. I never saw myself as a writer, either, but here I am.

I didn’t have much experience with dubbing movies, but luckily, considering this movie was so over-the-top, I had a lot of flexibility to make choices that I wouldn’t make on a more serious movie. So, I treated the dubbing like that of a foreign film where the mouths and dialogue don’t always match. I did my best to read the lips when I could, and then fill in everything else around those lines, by trying to match the syllables and timing the best that I could.

The hard part was trying to find places where I could get across the information I needed to in order to make sense out of the edit that I made. It was quite the process. Once I was done writing the new dialogue, I was able to get some awesome voice talent to come in and do the voices. I can’t take all the credit, as there were many people involved in different aspects throughout the process. We brought in a company called 3Beep in NYC that specializes in dubbing for foreign films and animation. 3Beep also handled all of the sound design (which was a monumental task).

The cherry on top was bringing in a band named Voyag3r to do an original score. And let me say, they did an amazing job.

At the end of the day, even I’m surprised that everything came together like it did.  The movie is a lot of fun, especially for the right type of audience who can appreciate movies like this. Can I say that New York Ninja is my movie? I guess that’s up for debate. But, I put nearly two years of work into finishing this movie, while everyone else abandoned it over the years. I may not have been involved in the original production, but I sure as hell put a lot into finishing it — which is why I took the credit, “Re-Directed by.”

I learned a lot about myself while working on this New York Ninja. One of the biggest things I learned was that I enjoy editing a lot more than I thought I did.  I learned that the chaos of being on set is not really my favorite part of the filmmaking process — it’s the editing.

Does this mean I’ll transition into becoming more of an editor now? I guess we’ll see. The only thing that I can say for certain is this:

If the opportunity to finish another forgotten film like this ever comes along, you better believe I’m going to take it.

New York Ninja, re-directed by Kurtis Spieler, is out now from Vinegar Syndrome.

Main image: a New York ninja does his thing in New York Ninja, by Kurtis Spieler.

Huma Hussain’s ‘Nafs Said’ Tells the Story of an Indian Muslim Housewife Trying to Break Free
In Undercover Underage, a 38-Year-Old Woman Poses as a Child to Identify Pedophiles Online