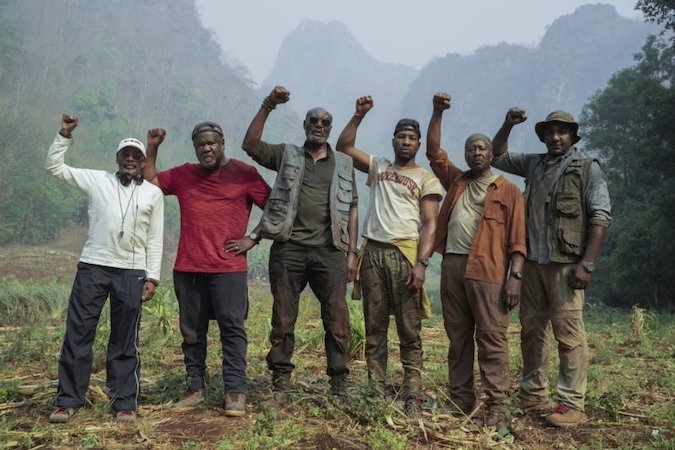 Despite the far-off setting of the new Spike Lee joint, Da 5 Bloods, cinematographer Newton Thomas Sigel made sure to incorporate some of the directors’ most familiar techniques.

Da 5 Bloods follows four black veterans in the present day who reunite in Vietnam, where they all served during the war. They’re searching for the bones of their exalted squad leader Stormin’ Norman (Black Panther’s Chadwick Boseman) and a treasure they were forced to leave behind. The film flashes back to the 1970s, which was also the time period of Lee’s last film, BlackKklansman.

One of Lee’s signature shots, Sigel said, is the direct-to-camera shot most famously seen in Do the Right Thing, when Radio Raheem (Bill Nunn) tells the story of love and hate. Lee and his Do the Right Thing DP Ernest Dickerson also used the straight-to-camera approach in a sequence when various characters spout racist insults right at the audience.

“It has signature things that have always bothered him and that he finds power in,” Sigel said of Da 5 Bloods. “Whether it’s direct addresses to camera, or whether it’s something like the Spike double-dolly shot.”

Sigel said Lee was also conscientious and deliberate in setting the film in Vietnam. “Spike was very cognizant of populating his movie with real Vietnamese actors,” he explained. “I think Spike just really felt the responsibility to tell the Vietnamese story accurately amongst it.”

Pre-production on Da 5 Bloods began when Lee had just finished the Oscar-winning BlackKklansman, while Sigel had been shooting Extraction, the recently released Netflix film starring Chris Hemsworth. Once Sigel and Lee had finally found room for collaboration, the entire production came together rather quickly.

Now the film feels as though it was ready-made for this moment.

Lee himself has lamented the horrific similarities between the real police killings of George Floyd and Eric Garner and the on-screen police killing of Radio Raheem in Do the Right Thing. And the Black Lives Matter protests may finally be opening most Americans’ minds to the kinds of reforms advocated by Lee’s 1989 film.

“I feel like it’s a great moment for this film to be seen and discussed, and for it to resonate,” Sigel said. “There’s a reason people are in the streets right now. So I think this movie’s going to speak with them, and it’s going to speak to them in a way that if you didn’t know any better, you would think that we changed the movie.”

Movie News: Back to Work; Oh My God, Becky; Criterion’s Black Lives Collection
Movie News: How to Go to a Movie Next Week