Foreign Contenders: Steven Yeun on Being a Man Without a Country, and His Enigmatic Character in South Korea’s Burning 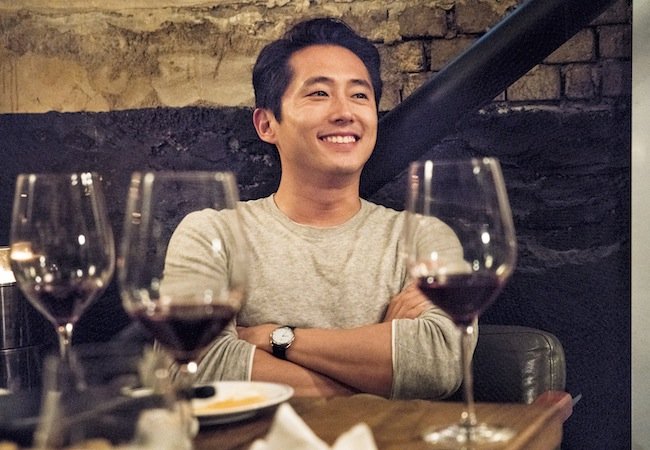 A household name among global TV audiences, who followed him over six seasons of hit show The Walking Dead, Korean-born actor Steven Yeun made the jump to feature films with 2014’s I Origins and quickly found his way into South Korean productions.

His first major role in the country of his birth was as part of Bong Joon-ho’s Netflix project Okja, which he followed with the quizzical American indie Sorry to Bother You. Proving to have infallible taste when choosing acting ventures, Yeun went on to work with Lee Chang-dong, a highly respected auteur with a faultless filmography, for his psychological mystery Burning—a movie creatively inspired by author Haruki Murakami’s short piece Barn Burning.

Chang-dong cast Yeun as Ben, an enigmatic and well-to-do man whose true emotions, shortcomings, or possible ulterior motives are concealed beneath a pleasant smile or a casual yawn. Unostentatiously, he befriends Hae-mi (Jeon Jong-seo), a fascinating young woman, and her childhood pal Jong-su (Yoo Ah-in), a less refined guy with hopes of becoming a writer.

Their interactions are marked by a power imbalance that’s not always obvious, but requires the viewer’s constant reevaluation of what is fact, what is alluded to, and what is merely assumed. Once Ben reveals to Jong-su he enjoys an unusual and destructive pastime, his every act is scrutinized to get to the truth, a likely unobtainable one.

An enthusiastic, thoughtful Yeun sat down with MovieMaker in Los Angeles to answer our burning questions regarding who Ben really is, his interpretation of such an impenetrable character, and the cultural enrichment he got from working in South Korea.

Steven Yeun in a scene from Burning. Courtesy of Well Go USA Entertainment

Carlos Aguilar, MovieMaker Magazine: How did you come on board Lee Chang-dong’s project? Were you actively looking to work in South Korea?

Steven Yeun (SY): No, I didn’t explicitly look to work in Korea, per se. I actually just got a call from director Lee in the middle of the night. I got it via director Bong-Joon Ho. Luckily I was already headed to Korea at the time, so I got to meet with him for three days, and we talked.

MM: How much of an adjustment was it a switch to act in a language other than English, even if it’s one you were familiar with?

SY: That was probably the biggest hurdle. My Korean is decent, my pronunciation is good, so I just had to make that really good and just work on that; just being present in Korean, and working with director Lee on intonation and nuance. Those were all the physical things that we had to work on.

MM: How did you initially perceive your character at first? Who is this man that you play, in terms of what you got from the screenplay?

SY: It kind of depends who’s watching him. The observer is kind of the central figure who determines who Ben is, but from my point of view, Ben always had this overwhelming sense of emptiness and loneliness about him that I really wanted to pry open and see. There were certain things that director Lee wrote into the script, like how he read Nietzsche; I also happened to be reading Nietzsche at the time, which was strange. There was just a general understanding of who he was. His basic philosophies are where we had to build him from, which are maybe a little nihilistic.

Steven Yeun in a scene from Burning

MM: While making Burning, did you learn anything culturally specific about how Korean society functions that you weren’t aware of before?

SY: I don’t think I got necessarily new information. If anything, I had prior information developed richly. My understanding became less about knowledge and more about, I don’t want to say wisdom, but more experiential. I felt like I knew a lot of things just from being Korean, but I had not felt a lot of things, so this experience was definitely one of those where it allowed me to walk in the shoes of someone that can help me have those feelings, and be able to feel the country of Korea in that way. Definitely knowledge gained.

MM: What were some of those feelings or notions that you perhaps knew philosophically and got to experience firsthand?

SY: I think it’s unique to me, but one thing I learned from my Korean experience is just how deep pain and trauma is rooted into the people, and how that’s passed down. Not just through inherited trauma, DNA or anything, but just through our customs and culture and how we look at the world. That’s very much how that gets passed down. I think director Lee’s Peppermint Candy really does a good job of exploring that aspect, and I was made aware of when I watched that film. But beyond that, I learned about the inherent loneliness of humans, especially myself, having to live that thin line between both cultures, and both cultures can also reject you too in their own ways. You’re then made aware of the fact that you really are just a man with no country.

MM: Logistically, how is different to make a movie in Korea, especially in a more art-house setting rather than working on a big production?

SY: I will say I didn’t really find too much difference. I think the Korean film industry now has caught up to a place where it’s pretty much running similar to America’s, and I will also say that I didn’t experience a very normal or clichéd version of the Korean filmmaking experience, because I got to do it with director Lee and with director Bong, so I really got a neutral, auteur situation. They have their own styles, they have their own ways of making it, and it didn’t seem very traditional even in Korea, so I don’t know. Sometimes you hear, in all cultures, stories where the director has a stranglehold on the production, and I think that’s what you typically hear of other cultures. It happens in America as well, but when you hear another culture’s film system, you usually hear the horror stories first. So you’re kind of told of this particular way of filmmaking, but really it was really open and free and welcoming.

MM: What was it like to work under these conditions with director Lee Chang-dong? What made his take on directing distinct from other filmmakers you’ve worked with?

SY: I felt the preciousness of the moment, I felt the freedom given to the actor, I felt a very collaborative way of working. I think one thing that I had to traverse for myself that really helped me is that in Korean society you always look to your elders in a very specific way. As a Korean-American, sometimes you’re taught a version of how to do that because of our immigrant-ness, so then when we go back to Korea we’re overly generous or overly cautious about dealing with elders, mostly because we don’t have to interact like that here. We’re free in this country, everybody’s at the same level —or you’d think. If I had held on to that, and I hadn’t felt freedom from director Lee to let go of that system, this probably would have been a performance that was really heavily trying to please him. But instead of that, director Lee really set up a situation where I wasn’t trying to please him, we were both trying to just find the truth in that scene for that moment, so then it felt collaborative, rather than a director telling an actor what to do. I’ve had both experiences. Working in TV sometimes they just tell you what to do, whereas this it one was us finding something. It was great.

Steven Yeun in a scene from Burning

MM: How did this reflect on your co-stars, Yoo Ah-in and Jeon Jong-seo?

SY: When you’re working with a director at the caliber of director Lee, he’s also assembling people that are trustworthy and professional. I’ve been very fortunate that the last three films that I’ve been a part of have had casts that were really professional. In Okja, everyone was incredible and everyone was doing their part; Sorry To Bother You, same thing, and on this one, exactly the same. You’re really just trying to live that moment, and you know that no one’s going to drop a line, no one’s going to be worried about what’s next, they’re just going to be reacting and offering and just being. When you can get those kinds of set situations, it’s really a fun time, because then it just feels real.

MM: The hero of this story describes your character as The Great Gatsby. Does he represent a certain empty beauty in the context of the class struggle we see in the film? He is the picture of coolness on the surface, but there might be something darker underneath.

SY: I think that’s one way to look at it. That’s definitely an early layer that you can see. I don’t disagree with that, but definitely for me, and over multiple viewings of this film, you start to gain an understanding of Ben, that I feel like is a bit deeper than darkness. Maybe it’s loneliness; sometimes I like to think about the idea that Ben is the most present person in every instance that he’s in, because he’s observing and watching and being there. He’s literally, physically there, and nobody else is there with him. Everybody else is off looking at their phones, or thinking of the next thing they want to say, because they’re trying to make a good impression or they want to exude a persona. Ben just is, and he’s there. Maybe that’s a lens that you can look at it too, where it’s actually sad to be present, because nobody’s there with you.

MM: Does the omission of violence in this character’s behavior help that complexity? We don’t see him commit any crimes.

SY: Sure. I think that’s director Lee’s intention, to keep that mystery alive. When you add up all the information that you’ve gathered by the end, I think you have one part of you that has made a decision on whether Ben is one way, and then there’s this other part, maybe in a more pragmatic sense, where you’re like, “I’m not actually sure.” That’s kind of how we perceive the world anyway. There are so many things that we come to conclusions on, especially nowadays; you hear something about someone, and you’ve already dialed up exactly who they are in your mind. People are complex beings, people are grey, and we see the world unfortunately in very black and white. MM