From the moment you arrive at the airport in Memphis, Tennessee, Elvis Presley follows you around as an omnipresent figure.

Indeed, the city’s musical past is present at every turn and for the past two decades the Indie Memphis Film Festival has incorporated this aspect into its programming, just as much as they have consistently introduced truly independent storytelling to local audiences. Beyond the festival that takes place each November, Indie Memphis preaches the gospel of bold moviemaking via year-round screenings.

“We searched far and wide to bring Memphis an eclectic snapshot of what American independent cinema looks like at present, whatever that term might conjure,” says Brandon Harris, who just enjoyed his last year as Artistic Director of the festival before moving to Amazon to develop the streaming service’s original movies. “We focus on American tales that hit close to home, but we travel far and wide to get them—and we make sure to program American narratives, documentaries, experiments in nearly equal measure.”

The festival’s 20th anniversary celebration aligned with MLK50, a series of commemorative events happening over the course of a year leading up to the 50th anniversary of Martin Luther King Jr.’s assassination. In response, a side bar titled “MLK Spotlight” brought titles with themes of social justice and the struggles of black people in America. Most notably, Jairus McLeary and Gethin Aldous’ The Work and Jonathan Olshefski’s Quest screened as part of this section.

A prominent presence this year was Adam Bhala Lough, who presented his newest documentary, The New Radical, alongside an in-depth talk about Bitcoin and the subjects of the film, Cody Wilson and Amir Taaki. Bhala Lough discussed the time he spent with these two infamous figures in the underground online community: one famous for creating and distributing the blueprint for the first 3D-printed gun and the other for his knowledge on crypto currency. Bhala Lough’s inclination for people on the fringes is also unmistakable in his fiction work. His second feature, Weapons, starring longtime collaborator Mark Webber and Paul Dano, was screened in its original director’s cut for the first time since it premiered at Sundance in 2007.

Among the festival’s slate of unassuming moviemakers was Abel Ferrara, who was honored at Indie Memphis with a small retrospective comprised of three of his films: Bad Lieutenant, The Blackout, and Alive in France. At the after-party, Ferrara took the stage to perform with his band, his wife, and young daughter. The strange performance did justice to his cinematic reputation and acknowledged the musicality of Elvis’ turf. It was an audiovisual experienced to behold. 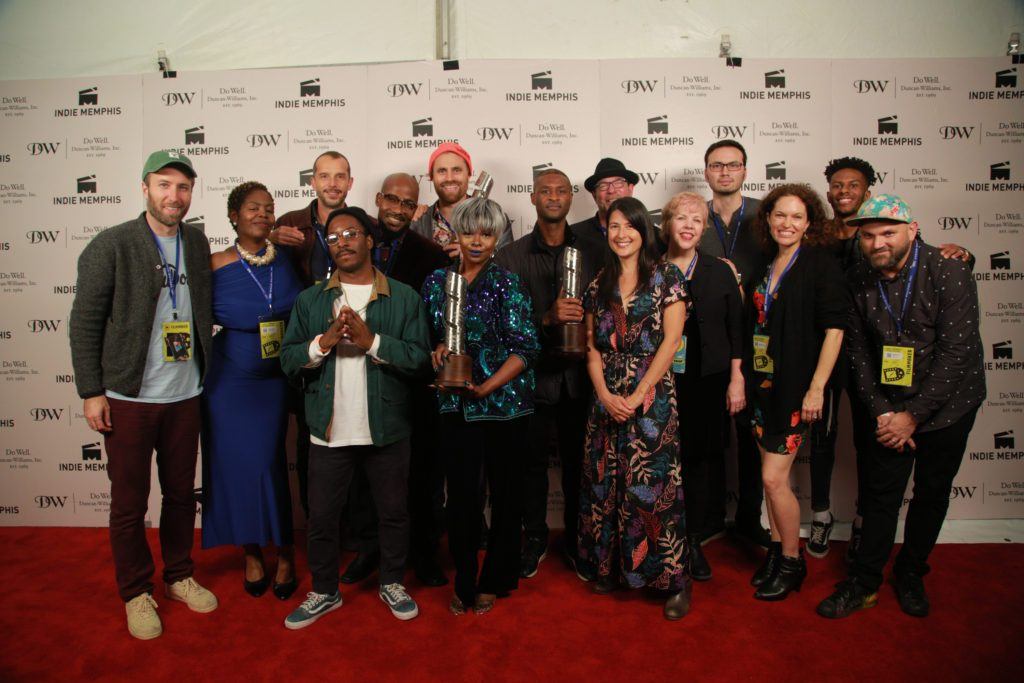 Other guests from diverse corners of the film ecosystem graced Memphis with free panels, including some that offered strategies for directors with limited access to resources. This point was addressed during a conversation titled “I Ain’t Got No Money: Directing Without a Trust Fund,” during which directors Zach Clark (Little Sister), Caroline Golum (A Feast of Man), Michael O’Shea (The Transfiguration), and Morgan Jon Fox (Feral) dished out on the role of festivals, their relationship with the press, and the defiance required to realize projects that don’t have obvious wide commercial appeal.

Noteworthy competition titles ranged from the frighteningly current such as A Gray State to the hopeful coming-of-age doc, For Ahkeem. Cold November, the Minnesota-made debut by Karl Jacob, took home the award for Best Narrative Feature.

Shindigs at legendary music studios, haunted brothels, and mansions are also part of the afterhours excitement at this festival, trips to barbecue joints are a must, and the many landmarks are there for one’s enjoyment, but the prime entrée is decisively the films and its makers. Memphis knows how to channel their iconic tropes for sure, but it has also learned to be an effervescent cinema city whose first two decades hosting a world-class festival with a laid-back vibe are more than a solid start. Come for Graceland, stay for the movies. MM

Indie Memphis 2017 ran from November 1-6, 2017. You find out more about the coming year’s festival here. Featured image photograph by Adam Bhala Lough, all other photos courtesy of Indie Memphis.