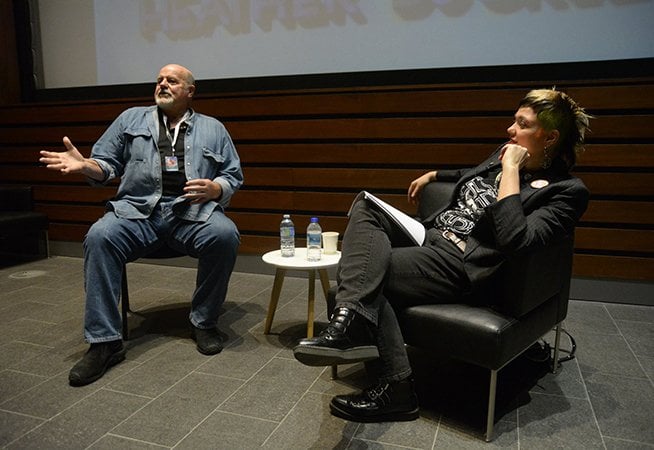 In attendance at the Fantasia International Film Festival in Montreal to promote his new thriller Knuckleball, Ironside sat down with moderator Heather Buckley and the Miskatonic Institute of Horror Studies to discuss his iconic, decades-long career.

A classically-trained performer with a background in playwriting, Ironside has been a longstanding presence in beloved action and science fiction classics such as Scanners, Top Gun, Total Recall, Starship Troopers, and The Machinist. With the rapt attention of a packed auditorium at Concordia University, Ironside took a deep dive into his multi-disciplinary beginnings as a playwright and actor; his work with fellow Canadian David Cronenberg and their collaboration to create Ironside’s seminal Scanners character; Paul Verhoeven’s authoritarian-trolling take in Starship Troopers; his dream role in Dune; and the enduring power of science fiction, fantasy, and horror storytelling to illuminate deep conflicts within ourselves and our society.

On the Link Between Writing, Acting, and Directing

[I took acting classes because] I’m a writer, and I wanted to learn more about the medium that I’m working in.

The basis for creativity in storytelling is in all three of those things: it’s in writing, it’s in directing, it’s in acting. It’s the same thing. It all comes from that same source. If you’ve ever been camping sitting around a fire, and somebody gets up and tells a story—that’s the basis of what we fucking do. It’s not on a cell phone, and it’s not on a laptop. You go into someplace where it’s dark, and the light comes up and somebody tells you a story. It’s the way we as human beings thrive: we pass on education, we pass on story, we pass on legend. We educate to [get an idea] into an audience’s mind with the least amount of distortion. That’s what this is all about.

David’s material is so bizarre. He consciously makes it a safe environment for the actors. You’re doing some bizarre shit in his films. You’ve got shit coming out of different parts of your body…[and so forth]. So he treats the actors with a lot of respect, and he creates this safety net around you.

I was hired for one scene [in Scanners] and he said, “We may put you in some other stuff.” And he restructured it. David was actually changing things as he went through, even after we’d already started. He rewrote most of the script about a week before we started shooting, and I didn’t know what I was going to be playing when I came in each day. I was very into anti-establishment characters at that time, and there was a huge thing going on with skinheads in England. And I remember hearing this one speech, “We are the product of miscarriages of justice. And you’re going to have to deal with us. You don’t get to just push us aside.” That’s what I took as an actor for Darryl Revok. David liked it and just kept going with it.

On Playing Darryl Revok in Scanners, a Character With Telekinesis

I can’t talk about it. I have family members who can rock rocking chairs with their minds, who can make brooms dance…and we share each other’s dreams…My younger brother was sitting at the kitchen table [one day] waiting to take the bus to school, my younger sister was down the hall, and I’m doing the dishes, and an apple and an orange were rolling around on the table, chasing each other. I came over and looked at it, and I looked at my dad who went [shrugs]. And my sister down the hall screams, “Don’t fuck with my lunch!”

When you’re working with an actor, you have to sit there and pretend—or rather, play—as if you know what’s going on inside them. David wanted the beginning [of Scanners]—when the guys shoot themselves, and Darryl is standing there going [glowers]—to be much more bombastic. And I said, “If you know what the outcome is, you can control it. Why would you have to be overt about it? It should be much more subtle.” If I were to do it now, I would do something similar but probably less emotional with less enjoyment in what he’s doing. There would be more passion and less show of that passion. When you know what you want, you don’t show it—you just go get it.

The original book [Starship Troopers] was a fascist call to arms. I went to Paul after he offered me the part and said, “Paul, why are you doing this piece of right-wing shit?” He said, “Do you question me?” And I said, “No Paul, I come from a very working-class labor family, and I want to know.” He said, “I’m going to do this story and make a perfect fascist world where everyone’s beautiful, everyone’s clean, everyone’s uniform is bright and shiny, and their weapons all work…but it’s only good for killing bugs. Does that satisfy you?” And I said, “I’m in.” Because Paul is not a fascist.

On the Role He’s Always Wished to Play

Gurney Halleck from Dune. I read Dune out of a fucking shoebox. I get emotional about this. My grandpa was one of the original Sci-Fi group, the first two hundred guys who got involved: Aleister Crowley, [Robert A.] Heinlein, and the whole bunch of them. I read Dune out of a shoebox that was sent to my grandfather. On it [Frank Herbert had written a note that] said, “…have a look through this and see if you can find any bugaboos.” And I fell in love with Gurney Halleckas. He was this oversized, angry warrior who could play the lute. He had two extremes to himself. That’s the way I’ve felt most of my life.

When Rafaella De Laurentiis first cast Dune, I was hired to play Halleck. Jane Fonda was going to play Jessica, and then she pulled out. Marlon Brando, who was going to play the Baron Harkonnen, pulled out. And Max von Sydow had to pull out. The whole thing fell apart. And when it was put back together again, I had already signed on with Extreme Prejudice.

On the Cultural Significance of Genre Fiction

The great thing about sci-fi and horror is that we can take real stories that people can’t see the reality of and put them in a context where they can look at them safely. For example, V was never about aliens. It was written as if America never joined the war, and Hitler had conquered Europe. So the fascists took over Europe, and the Japanese took over China, and democracy still lives in North America and parts of South America. The money people at the studio took a look at it and said, “Nobody’s going to watch this fucking thing. It’s a piece of shit. Who wants to watch political crap?” So [Kenneth Johnson] went back and made them fascist aliens and changed it all around so politically the metaphors were what they are. And basically it’s about democracy, and a threat against democracy. They’re aliens so people will say they’re one thing, but actually they’re something else entirely. MM