The Family That Makes Movies Together Stays Together: Working With Your Kids? It’s Possible, Say These Clans

“I took some footage of him, which we ended up using in the film,” Larry says now. Jack played “young Miles” (grown-up Miles was actor Erik Per Sullivan). Little did dad and mom know that 15 years later Jack would be releasing his first feature film, Stray Bullets, which he wrote, directed and starred in along with his father, actor James Le Gros and Jack’s one-time Wendigo co-star John Speredakos.

Chip Off the Old Block

Stray Bullets concerns two teenage boys who, while cleaning out their father’s old mobile home on an abandoned property, discover that three crooks on the run have taken refuge in the trailer.

How did Jack transition into a writer/director/actor? “I grew up on set,” Jack says. “I specifically remember being on the set of [his father’s film] Bitter Feast in 2009, which was shot almost entirely at our country house in upstate New York.

“The entire crew was living in our house. I had to be relocated to a closet because my room became make-up and wardrobe. I would spend my summer days hanging out with the crew. I would go rollerblading when the boom operator went for a jog. I made friends with a lot of the crew. From a very young age I hung out with kids in their 20s.”

It was on this shoot that Jack first began to notice the different roles in making a film. Moviemaking was never a singular obsession with him, he says, but while growing up around it he became inspired and began to want to tell his own stories.

“I don’t know if Jack will go into the business,” Larry says. “He certainly knows the reality of the business. He’s seen my struggles. He’s seen our comrades in the independent world and how they’ve struggled. But I think he also sees that I just love the language of cinema. I think he has a healthy understanding of the difficulties and I’ve always encouraged him to learn a trade, as well, like maybe be a session musician, or learn post-production. Being a writer-director is the gold ring, but it’s extremely difficult to sustain that.”

Larry also is aware of the difference between New York, where the Fessendens are primarily based, and Los Angeles, where “people rarely say ‘No’ and instead say ‘Maybe.’”

“You can hang onto your hopes and dreams for years and nothing ever really gets done,” he says of Hollywood. “That’s why I’m a champion of the independent process. Get a small amount of money and do it using your guts and smarts.” It’s a valuable life lesson to get from your father.

While they won’t reveal the film’s budget, the Fessendens did say that the majority of the budget for Stray Bullets went to the camera.

“We got a guy with a RED,” Jack says. “Each night, we watched what we called ‘The Dailies Show.’ That ended up being great for boosting morale on the set. Everybody became more excited because they saw that what we were doing was looking really good. To me, that was the best use of the budget.”

Where else did the money go? “The food,” says Larry. “It’s amazing how much that was. Everybody stayed at our house upstate, so that wasn’t an issue. The budget was really as if we had a party for 15 people for 15 days.”

The crew of Stray Bullets, directed by Jack Fessenden

“That’s me in the basket in the Nile floating in the bulrushes,” Heston recalls fondly. “I’m one of the last surviving actors to have worked with DeMille.”

With such an auspicious entry into film, it may be surprising that Heston, at first, had no desire to be a filmmaker. “I wanted to be Jacques Cousteau,” he says. “I studied marine biology at UC San Diego for a year and then somehow got bitten by the writing bug and transferred to UCLA, majoring in English Lit and Creative Writing. I never studied film. Never took a film class in my life.”

He laughs. “I’ll amend that. I took a film appreciation class at UC San Diego and I got an ‘A’ because I was able to get a print of Touch of Evil for the teacher to show in class.”

However, the film DNA inevitably took over. Like Jack, Heston grew up on his father’s sets. His mother and father took him everywhere, with young Fraser often spending hours sitting in his father’s chair.

Following UCLA, he ended up writing a script called The Mountain Men and was independently setting it up. “At the producers insistence, we presented it to my father,” Heston says. “He read it, loved it and said, ‘Yes, let’s do it.’ We were able to set it up at Columbia back in 1978.”

Following that, young Heston wrote Mother Lode, which also starred his father, then produced TNT’s first movie-for-television, a version of Robert Bolt’s A Man For All Seasons, starring his father, John Gielgud and Vanessa Redgrave.

His leap into directing happened during the production of that film.

“I was having lunch with Ted Turner at Pinewood Studios,” Heston recalls. “Ted said, ‘Boy, I think this is going to be wonderful. What do you all want to do next? Let’s do something with boats. I’m nuts about boats.’ Ted was a sailor and I like sailing too. So just off the top of my head I said, ‘Let’s do Treasure Island, it hasn’t been done in a while.’ He said, ‘Great. We’ll do it.’ ‘But,’ I said, ‘I have to direct it.’ I threw that out as an afterthought. He said, ‘Fine. You’re on, kid.’ His people turned to him and said, ‘We shouldn’t commit to that. He’s young, he hasn’t directed anything.’ And he said, ‘No, I told him he could direct it, he can direct it.’ There’s a man who knows how to make a decision and I owe Ted Turner my career as a director.” 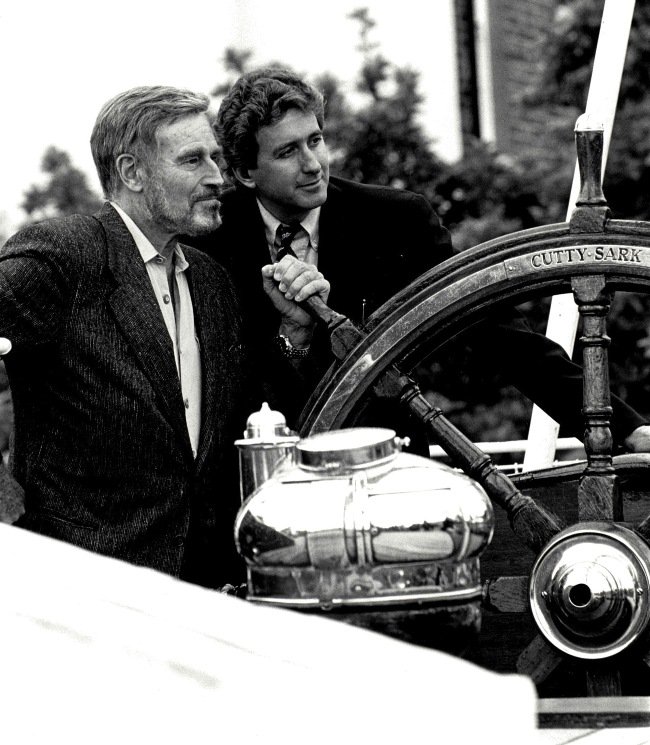 Did his father ever try to dissuade him from filmmaking?

“He only tried to talk me out of being an actor. He said, it’s a tough row to hoe being an actor’s son. Not many have pulled it off,” Heston says. “He didn’t want me to be a child actor, except for my big starring turn in Ten Commandments. But I never wanted to be an actor. I was a writer and made that leap into filmmaking. My dad and my mom always supported me in whatever decision I made.

“I would show him early drafts and sometimes say, ‘I don’t think there’s anything for you in this. What do you think?’ He was great with dialogue. He’d hone it down and hone it down. Almost Hemmingway-esque. Most of the projects I set up first, and then brought him in afterwards, or got his approval first then took it out to get it made,” he says. “Undoubtedly having his name attached was a huge feather in a cap for any filmmaker. However, I wouldn’t be who I am today if it wasn’t for my mom and dad. I credit them more for being good parents, and dad a loving husband. They were married for 65 years, which is extremely rare in this business. My mom, Lydia Clarke Heston, is still with us. She’s 93 years old.”

That may be the key to avoiding the pitfalls of a family working together in entertainment. Like the Fessendens, Fraser says that the Hestons worked because of the strong family relationship first. And with his legendary grandfather, and successful writer/director father, it’s no wonder that Fraser’s son Jack Heston has also entered the film industry, producing last year’s Tell Me How I Die and Amateur (currently in post-production). Jack is developing a feature based on his father’s 2011 documentary The Search for Michael Rockefeller.

Taking moviemaking on the road is the Adams family: dad John, 12-year-old Zelda, 17-year-old Lulu and mom Toby Poser, who started out in film, television and soaps before becoming frustrated with the lack of control and who, as John explains, “took the bull by the horns and wrote a script.”

“We bought an RV,” he says, “and went around the country learning how to make a movie and discovering whether or not we could do it.”

That 2010 film, Rumblestrips, cast Toby as a mom arrested for growing marijuana. In between her conviction and sentencing, she decides to take her two daughters on an RV trip to be with them and prepare them for her absence. 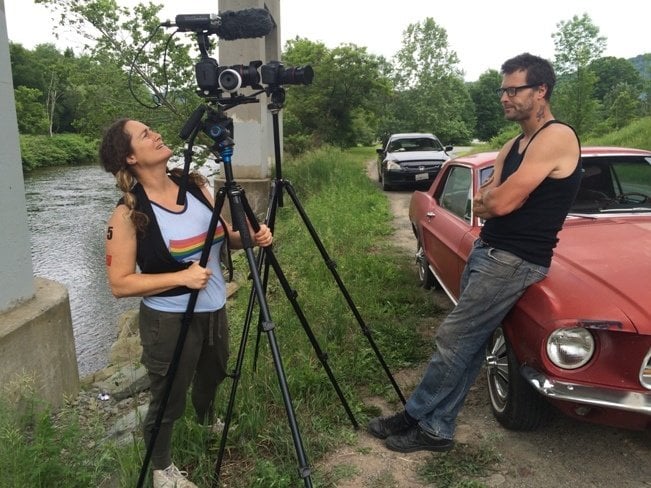 While Toby and John classify their films as “family films,” Rumblestrips’ plot makes it clear that they are not your typical family films. The Adamses are not afraid to delve into serious subjects like addiction, gender identity and perceptions of death, but through the lens of a broken family searching for cohesion and, as Toby says, “with our recognizable brand of honesty and dark humor.”

Their fourth and most recent film, Halfway to Zen, just captured the Best Independent Spirit Award (Narrative) at the Sedona International Film Festival. When one examines the credits, it seems as if these four creative dynamos are capable of anything: writing, directing, acting, music, cinematography, camera operating.

“We’re a foursome,” Toby says. “When the kids aren’t in front of the camera, they’re shooting one or running sound.”