Eddie Murphy Explains How He Became a Movie Star 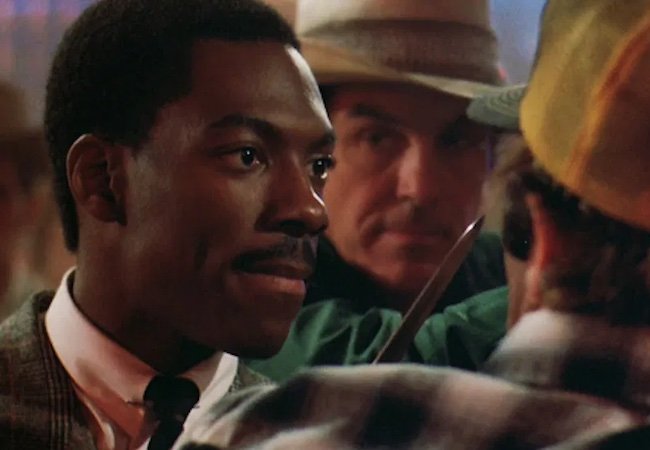 Eddie Murphy answers a question on the latest episode of Marc Maron’s WTF that dogged him early in his career: How did he get so famous so fast?
No one asks the Coming 2 America star that question anymore, after four decades of hits. But in the early ’80s, young Eddie Murphy seemed mysterious and new to many talk-show hosts — even though show businesses wasn’t new to him. As he recounted to Maron, he spent years doing standup before he landed Saturday Night Live in 1980, at the age of 19.
Still, early interviewers seemed skeptical as they asked him questions about how he broke through, and even about his watch.
“It was specifically this list of Black questions,” Maron said on the podcast. “There was sort of a weird kind of innate bias.”
Murphy explained: “It wasn’t weird. It was the ’80s. It was a whole, different world back then. It was the old world back then, still. The ’70s and the ’60s, it wasn’t that far removed from that in 1981. So it’s like sensibilities and and perceptions and what you could say — there was no politically incorrect, you could say whatever. … I wasn’t surprised by it, because those were the times.”
But he also explained what made him different — and why he thinks he became so incredibly popular.
“The reason I blew up in films was because I’m the the first African-American — the character in the movie — to go into the white world and take charge in the world. Because usually the Black character up until then, the Black character was the sidekick.”
You can isolate exactly what Murphy is talking about in his first film, Walter Hill’s 1982 crime film 48 Hours. Murphy doesn’t even appear for the first 25 minutes of the film. We follow Nick Nolte as Jack Cates, a gruff, tough-guy cop trying to catch a felon. Cates bounces Murphy’s character from prison, to help him crack the case, and 48 Hours goes from a gritty crime drama to something much more interesting: a model for countless buddy movies to come, and a fascinating look at racial dynamics.
Fifteen minutes after Murphy first appears on screen, a star is born, in exactly the manner Murphy described to Maron. Murphy’s character, Reggie Hammond, walks into a country Western bar decorated with Confederate flags and packed with rowdy, racist, gun-toting white people he labels “rednecks.”
He confidently takes charge of the room – then buttons the scene by telling them: “There’s a new sheriff in town, and his name is Reggie Hammond.”
Here’s the scene, which is loaded with things that would probably not be in a movie released in 2021.

You can read the 48 Hours script here to see how much Murphy added to it.
“In the first movie, it’s written like the sidekick, but if you watch the movie, he’s not the sidekick,” Murphy told Maron.
In the first half of 48 Hours, Cates berates and mocks Hammond, calling him “convict” and various racial slurs. But Hammond always keeps his cool, holds his own when Cates tries to beat him up, and proves himself a better detective than Cates.
One way Murphy takes control of scenes is to fake-laugh at the lame insults lobbed at Hammond — like when the bartender in the bar scene says Hammond must want a “Black Russian” to drink, and when Cates makes a joke about one of Hammond’s old suits. Murphy’s laughs aren’t in the script.
Also Read: John Singleton Gave Coming 2 AmericaDirector Craig Brewer His Big Break — and Told Him to Always ‘Hire Some Black People’
The filmmakers didn’t necessarily plan for Hammond to stand up to Cates so successfully, Murphy said.
“That was some shit that we just stumbled onto,” Murphy told Maron. “It wasn’t intentional… Back then they used to say ‘He stole the scene, he stole the scene.’ Literally. ‘It was not written for him to be like that. He stole the scene.’ But they thought that was really, really funny.”
You can listen to the full WTF interview here.
Main image, above: Eddie Murphy in 48 Hours.