Cinequest 23: 86 US and World premieres constitute the Cinequest line-up
by James Kaelan 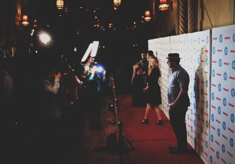 If Cinequest were a film, the plot would be too complicated to condense into an elevator pitch. For the last 23 years, the festival has not only been a World Premiere destination in the heart of the Silicon Valley; it’s also been a technology expo, global film education enterprise, and independent movie distributor.

This year, Cinequest hosted 86 (86!) US and World Premieres, including Aftermath, Sweet Talk, and Sparks, amongst many others. On the technology front, in collaboration with Sony, they presented the festival in astounding 4K (the first time any major festival has done so). And as part of their Picture the Possibilities education program—a worldwide filmmaking mentorship initiative that helps underserved, aspiring moviemakers try their hand at production—they screened shorts from New York, Los Angeles, Silicon Valley, Mexico City, and Hong Kong, and flew the young directors out to present their work before a packed house at the gorgeously-restored California Theatre.
Did I mention that as part of their Maverick Awards series, Cinequest also celebrated Chuck Palahniuk, Harrison Ford, and Salman Rushdie—all of whom gave enlightening talks about pushing limits in their respective fields? Seriously, the list of features on the Cinequest spec sheet is mind-boggling.

But the highlight of the festivities, for me, was Thomas Farone’s Aftermath. And when I say “Thomas Farone’s Aftermath,” I mean that Farone, short of starring in the film, did everything. He wrote it, directed it, shot it, and edited it. He’s also a full producer on the project. But his polymath moniker wouldn’t mean much if he hadn’t created such a remarkable film. Aftermath, featuring the late Chris Penn’s final performance, gestated for nearly seven years (Penn died in 2006). Belonging to the class of independent criminal underworld films of the 1990’s (think Reservoir Dogs or True Romance, with a Winter’s Bone realism), Aftermath is not only brilliantly acted (there isn’t an actor in the film who misses, even with a line delivery), but also impeccably edited. At 77 minutes, it’s been stripped of any scent of fat. But the ordering and pacing of the scenes are remarkable as much for what Farone discarded as for what he kept. The rough cuts of the film must number in the high hundreds.

As Aftermath makes the festival rounds this year, make sure you see it. And when Cinequest reappears next March, seriously consider making the commute to the Bay Area. It’s worth it.