The Best Places to Live and Work as a Moviemaker 2019: Small Cities and Towns

Savannah Historic District, with its oak-shaded parks and Spanish moss looming over cobblestone streets, is like stepping into the past even before a film crew has performed their wizardry. It’s no wonder the upcoming Civil War-themed drama Emperor settled there after scouting all over the South. In search of a period fort in good condition, co-writer and director Mark Amin says Savannah didn’t disappoint: “We found Fort Jackson in Savannah, which we could cheat as Harper’s Ferry in West Virginia, so we thought we’d found the perfect location. We also found a period plantation with slave shacks, which is really hard to find.”

“The shoot was 28 days long, with at least 10 filming locations; one Savannah location that was particularly memorable was a road next to a lake, where the road was separated from the lake by a few trees and you could see the lake through the trees—all very beautiful,” Amin recalls. “There was also the road leading up to Wormsloe plantation, which is now a state historic site, where trees arch over the road to create a tunnel effect.” Amin also praises the GA tax credit, Savannah’s individual tax credit on top of it, as well as local crews: “Our first A.D. was especially good—I started calling him ‘Jedi’ by the end of the shoot.”

Given that it’s reportedly set around the turn of the century, it’s not surprising that Disney chose Savannah to film its upcoming live-action Lady and the Tramp. (The film is rumored to be the first that will debut on Disney’s yet-to-be-unveiled streaming site in 2019.) The upcoming Will Smith vs. Will Smith sci-fi film Gemini Man also filmed in Savannah’s Wright Square over the summer, while the Sylvester Stallone-starring action film Backtrace filmed on Hutchinson Island earlier in the year. Having served as 2nd Assistant Director on Lady and the Tramp and the Liam Hemsworth thriller Killerman, Witt Lacy has kind words for Savannah as a place to work and live. “The town is inviting and the locations are gorgeous, and it wasn’t long until I was met with Southern warmth both in weather and heart” he says. “After working a few gigs, I realized there was lots of potential in Savannah.” As for constructive criticism, Lacy says Savannah needs “more film infrastructure, crew, and stage space to accommodate needs of larger projects, or multiple projects; the city is working to rectify those problems with additional incentives and rebates. Savannah has been growing into a viable, beautiful filming location, but she still has growing to do.”

In more ways than one New Orleans continues to be a city on the mend. Thirteen years after floodwall failures led to devastating flooding during Hurricane Katrina, two gigantic new pump stations and barrier gates were completed in 2018, representing the culmination of over $14 billion worth of post-Katrina repairs. Further down the priority ladder, but still important, 2018 saw the city rebounding from its dip in film production that followed the 2015 decision to plug a budget cap with a cap on tax credits at $180 million per year. Adjustments made in 2017 include new incentives for the creation of good, lasting employment for state residents and a five percent credit for filming throughout the state, outside of the New Orleans area.

“The legislative changes to the state’s tax credit program re-established industry confidence in Louisiana,” says Film New Orleans Interim Director Carroll Morton. “The result has been a boom for filming in New Orleans with the city’s 15-plus years of building infrastructure, studios and a deeply experienced crew base attracting productions.” He goes on to say that the city is a natural t with the film industry because the latter “blends with our rich traditions in music, food, and festivals. The end of 2018 is experiencing close to a record level of film activity, and I’m happy to report there’s more on the way for 2019.”

Multiple Emmy wins for Netflix’s limited series Godless this fall will only continue to bolster Santa Fe’s reputation as a go-to locale for thinking Westerns after the similarly contemplative Hostiles, with Christian Bale, also lensed here before opening to acclaim. Add to that the Coen brothers Western anthology, The Ballad of Buster Scruggs, and there’s a trend forming. Even a simple cowhand can appreciate a refundable tax credit of up to 30 percent and a small-budget-friendly lack of minimum spend.

Santa Fe’s competitive incentives and proactive, engaging Film Office are only a couple of reasons one might choose to call this UNESCO-recognized area home; its high-culture delights such as the Santa Fe Opera and Aspen Santa Fe Ballet are matched by the natural architectural beauty of places like Taos Pueblo, a Native American settlement at the base of the Sangre de Cristo Mountains established 1,000 years ago. You can also visit the San Geronimo Chapel, built in 1619 and destroyed during the Mexican-American War. Perhaps the biggest wonder about Santa Fe is that a cultural treasure like this has a population of only 83,000 souls.

Tim Blake Nelson as the misnamed “Misanthrope” in this scene from The Ballad of Buster Scruggs, shot just outside Santa Fe. Courtesy of Netflix

Bolstered by a nearly 30-year-old Film Office that serves Pittsburgh and 10 counties in Western Pennsylvania with high enthusiasm, Steel City continues to be on an upswing as a film production hub. Netflix was in town shooting season two of Mindhunter while the Tom Hanks-starring Mr. Rogers film A Beautiful Day in the Neighborhood also began filming in the fall. CBS All-Access also recently chose Pittsburgh to film the pilot season of the rust-belt mystery series One Dollar.

Tom Hanks as Mr. Rodgers in the Pittsburgh-shot A Beautiful Day in the Neighborhood. Image Courtesy of Tristar Pictures.

“One thing I always hear from clients coming into town, with a sense of surprise, is: People in Cincinnati are so nice!,” says Kristen Erwin Schlotman, Executive Director of Film Cincinnati, on how the city impresses visitors with charm, and enthusiasm for cinema. “Cincinnati knows how to embrace films and how to be efficient, how to answer their questions and make their experience the best possible,” she adds. “Every single film company that has come to Cincinnati to shoot has returned for a second, third, fourth time, and so on. This is a testament to how welcoming and ‘quality’ the people, crews, and talent are.”

Another testament is the work: At least 10 pictures have filmed here in the last four years. Over the summer the Netflix action film Point Blank, starring Anthony Mackie, filmed here. Originally conceived as an L.A. story, the script was rewritten to accommodate Cincinnati once it was chosen as a cost-friendly alternative. Bruce Willis returned to Queen City in late summer for filming the action thriller 10 Minutes Gone downtown. Cast and crew were spotted at the historic Guilford building and had Fourth Street blocked for filming. 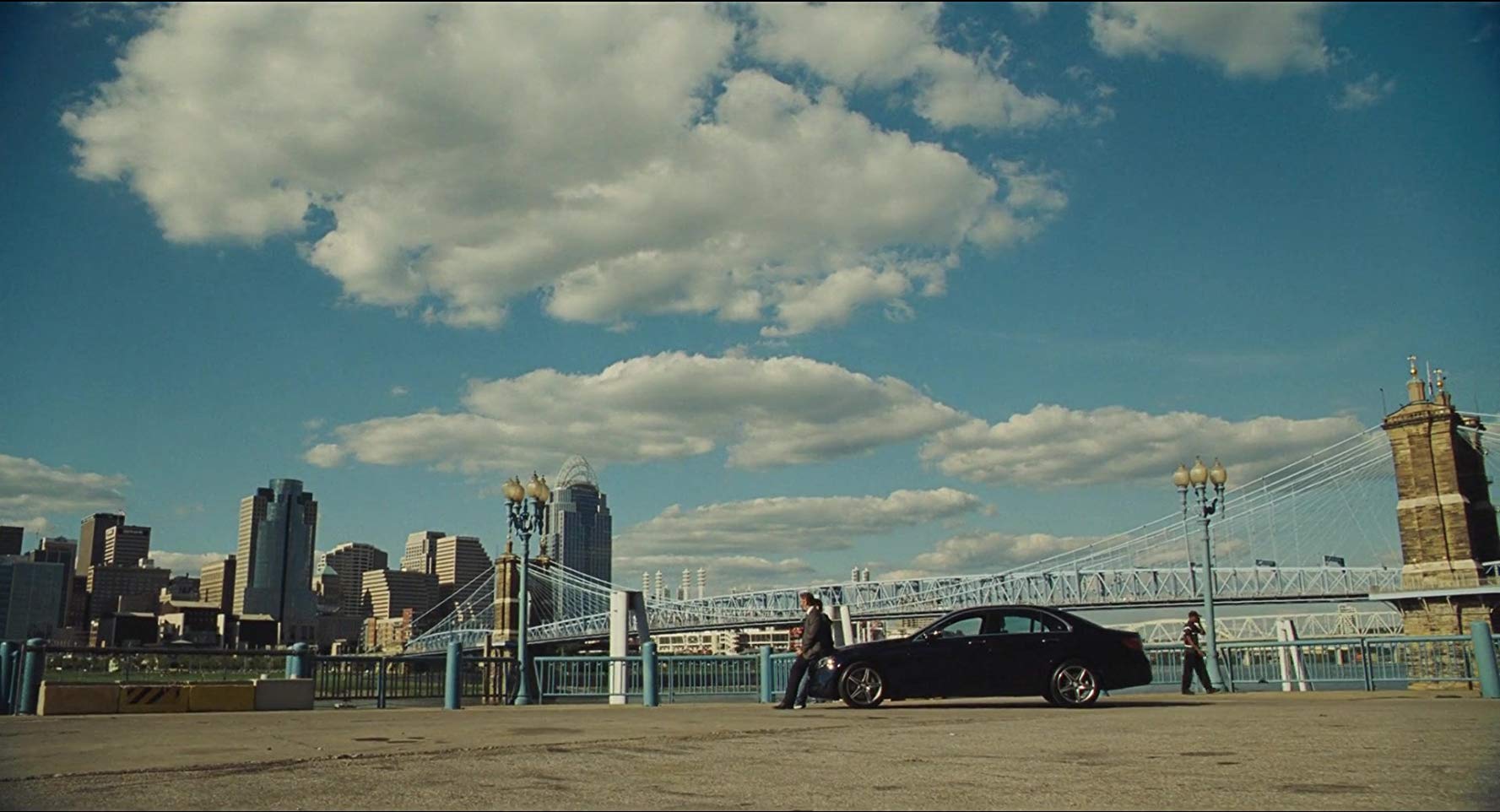 The unique skyline of Cincinnati fills the screen in Yorgos Lanthimos’ The Killing of a Sacred Deer. Image Courtesy of A24.