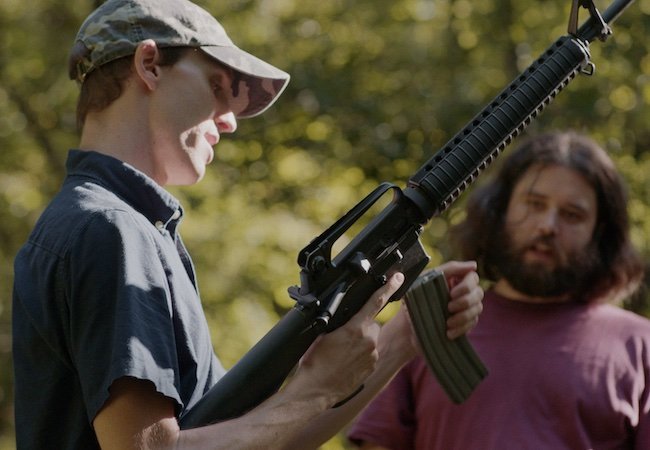 Beast Beast does something you don’t usually see in a Sundance darling: It presents a gun-obsessive who is, at least initially, sympathetic.

The film, written and directed by Danny Madden and executive produced by, among others, Alec Baldwin, tells the story of three Georgia teens whose lives intersect tragically. Shirley Chen plays a theater kid, Krista; Jose Angeles plays a skater she likes, Nito; and Will Madden, Danny Madden’s brother, plays Adam, a gun aficionado who dreams of YouTube stardom.

Whatever our thoughts on guns, Adam wins us over with his modern underdog qualities: Internet commenters belittle his videos. He stumbles when trying to sound cool in his intros. He has no idea how to be an influencer. His dad urges him to give it up if he can’t monetize.

Baldwin initially saw him being played by a Channing Tatum type whose good looks in real life don’t translate to Internet fame.

“I was looking at a guy who was like the captain of the football team,” Baldwin told MovieMaker. “Like he like he had everything going for him. But he just had no social skills, like all the cool kids in school are leaving him in the dust in terms of his able his ability to project himself through social media. … I thought this guy was a guy who was good at something and just a failure at this, and maybe had a kind of an aggression to begin with to lead towards something potentially violent.

“Well, we threw all that out the window, because in walks his brother,” Baldwin added.

Also Read: Jim Cummings on How to ‘Become Yorgos Lanthimos From Your Garage’

Will Madden is rail-thin, and Danny Madden played that up by having him wear clothes that were too big. His version of Adam seems amiable, eager for approval — and like someone who might get a strongly desired sense of strength from holding a weapon.

But Adam isn’t the heart of the movie. That would be Chen’s Krista. Beast Beast gets its name from a theater warm-up exercise/chant that Chen really did use in acting classes: “Beast, beast, ready to act!”

The origin of Beast Beast is a short film, “Krista,” focused on Krista. It drew the attention of Baldwin’s producing partner, Casey Bader, after it won the Vimeo Staff Pick Award at SXSW in 2018. Part of the prize was that the film went up on Vimeo the next day. Here it is:

As soon as Danny Madden knew “Krista” was going up on Vimeo, he and his collaborators got to work on a Kickstarter video to raise money for the feature that became Beast Beast. They timed it to launch along with “Krista” debuting online.

“It was like, ‘Hey, the movie’s going online tomorrow as a staff premiere, why don’t we skip the closing night festival party, go home and work all night on a Kickstarter video and announce the feature?'” Danny Madden said. “Because I had a first draft of the screenplay.”

Another of Madden’s executive producers on “Krista” — and Beast Beast — was Jim Cummings, whose film Thunder Road won the SXSW Narrative Feature Jury prize the same year “Krista” won the Vimeo Award. Cummings plays a cop in Thunder Road and last year’s horror comedy The Wolf of Snow Hollow. He also pops up in Beast Beast as… yes.

“Jim and I’ve been making movies together for like 12 or 13 years now. So we always kind of help each other out however we can. And you know, I’ve helped on his movies, and he’s always kind of worked in some kind of producing capacity or whatever we need on things I do,” said Madden. “So he was coming down to Georgia. And he said, ‘Should I bring my cop uniform?'” 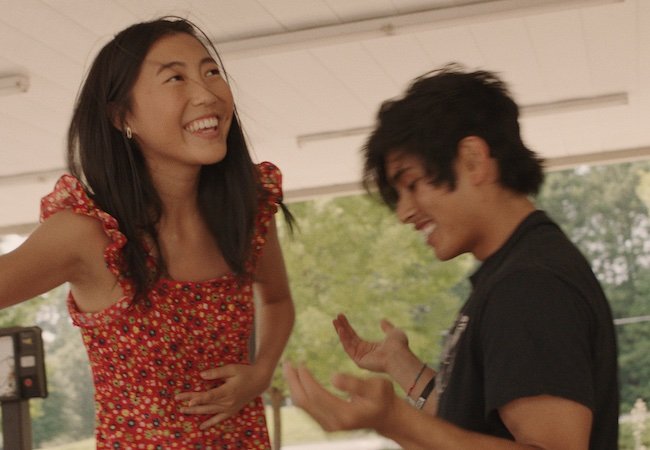 Madden and Cummings both personify the indie approach of creating as much as you can, and not being too precious.

“You know, I have so many friends that do a short film and they sit on it for a year-and-a-half not putting it online. Because of — I don’t know — some kind of like antiquated protective philosophy,” Danny Madden said.

Many filmmakers keep their films offline for fear that they will be disqualified from festivals. But the Vimeo made his calculations much easier.

“I don’t think Casey and Alec would have stumbled on it if it wasn’t on Vimeo,” he said.

They agree that that’s true. But Baldwin also said “Krista” stood out from other shorts because of its pacing.

“So many things I would see, when I would take the time to go to festivals, and when I would take the time recently to look at things online… a good amount of the time, I would say, ‘If they took out all the unearned pauses in this movie, we’d have a good movie,'” Baldwin said. “And Danny comes along, and there’s a vitality to what Danny does, an energy to what Danny does. And like all good filmmakers, he takes the pause when he earns the pause… Danny has got that musical ear and that musical eye.”

Baldwin said he knew audiences responded to Madden’s approach when the film premiered to acclaim at Sundance last year.

“Danny just had that that clock in his head where he knows when to drive it, and when to slow down. And and just the vitality of his directing, and of his cutting and his moviemaking, was something that we thought, ‘Well, yeah, we’d love to work with this guy.'”

Beast Beast is now viewable through virtual screenings and in select theaters.