Baby Money Is a High-Stakes Home-Invasion Thriller, Full of Lessons for Scrappy Filmmakers 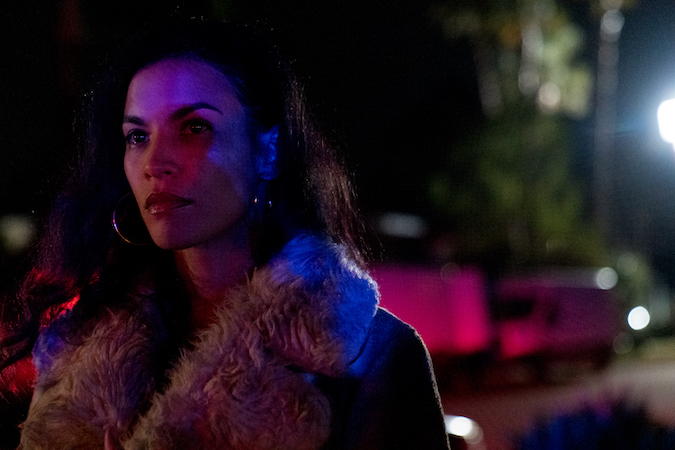 Remember that Jean-Luc Godard quote that he didn’t exactly say? “All you need for a movie is a gun and a girl”? Baby Money takes it to heart, and raises the stakes by making the girl a pregnant exotic dancer, and adding another mom to the mix, as well as some very jittery, dangerous men.

The film, which world-premiered at Montreal’s Fantasia Film Festival, feels like a throwback to one of those taut, ruthless, gritty crime-heist thrillers you would find late night on premium cable in the 1980s and ’90s — the kind of movie where two short-fused crooks hold helpless women hostage as they await the tough ex-cop boyfriend who will eventually bust down doors and kick ass.

But what if the boyfriend is one of the crooks, and there’s no Dolph Lundgren-type to save the damsels in distress? That’s the believable setup of Baby Money, in which everyone’s motives are messy but we’re still rooting hard for Minny (Danay Garcia), the focused mom-to-be who agrees to drive the getaway car for a misbegotten home-invasion in the San Fernando Valley.

Baby Money isn’t the best movie I’ve ever seen, but it is certainly one of the best home-invasion thrillers made for well under a million dollars. It reminded me of Breaking Bad and that incredibly stressful donut-shop robbery scene in Boogie Nights. It would be a pretty perfect Netflix thriller, with its catchy title and Garcia’s built-in fandom for Prison Break and Fear the Walking Dead.

Minny and the baby’s father, Gil (Michael Drayer) need the heist money for rent and to deliver and raise their child. Unfortunately, their partner is the self-centered and stupidly violent Dom (Joey Kern) who gets more brutal as things go more disastrously wrong.

They soon cross paths with ob-gyn nurse Heidi (Taja V. Simpson), the only character in the film with completely pure motives: She’s trying to protect her son (newcomer Vernon Taylor II), who has cerebral palsy. A doctor once told her he would never lead a meaningful life.

The mom and mom-to-be are both compelling, and Mikhael Bassilli, the film’s co-writer, co-director and driving force behind Baby Money, does a good job of escalating things horribly, but logically. He leads a group called the Screenplay Awards Network, which I had not previously heard of but which aims to help writers get their scripts produced. Baby Money is a good display of his talents.

Inspired by films like Reservoir Dogs and Last House on the Left that take place mostly on one set, he reverse-engineered a story he could tell in just a few locations, with a small cast, while still building out a chilling recreation of a dark night in the Valley.

He wrote in a candid director’s statement for Fantasia that he developed the script “out of necessity” after a previous film fell apart, as he and his wife welcomed a newborn daughter. “I remember sitting on my kitchen counter with tears in my eyes telling my wife I didn’t think I would ever accomplish my dream,” he wrote.

But then he began working on a script with a “minimal location, minimal character, minimal stunts, minimal everything. I wanted to write it fast, make it good (hopefully great) …and film it MYSELF. I had no faith in raising money from anyone… I had no time, no rich family members, and no more optimism that anyone would finance my efforts.”

Bassilli says that he ultimately sold his house to finance the film — at the peak of L.A.’s inflated housing market, I hope? Baby Money was budgeted at $250,000.

Despite the low budget, Baby Money never looks cheap. Besides a cast of solid actors, it benefits from tense music by Oumi Kapita, detailed production design by Genevieve Parks and skillful use of some rented cop cars. (I counted just two, but they help create an ominous sense of the law closing in. The credits list Cop Shop L.A., a company run by former cops that provide equipment and cars for film shoots.)

Bassilli wrote the initial script in three days, and then enlisted writer MJ Palo, whose work he remembered from one of his screenwriting contests, for help with revisions. “I was particularly attracted to her sense of humor on the page and she loved my draft and believed in the vision,” he wrote. So never let anyone tell you nothing ever comes from screenwriting competitions.

Baby Money was shot during the pandemic, which makes it even more impressive. But it’s involving enough that you won’t be thinking about that.

Baby Money is now playing at the Fantasia Film Festival.

Beyond the Infinite Two Minutes Is Like 1917 Crossed With Tenet — But Cheaper and More Fun
NFMLA Celebrates Native Cinema with an Inspiring Drag Queen, a Dying Teenager and a Hard-of-Hearing Dancer