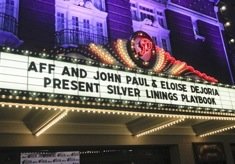 In 2009, my first feature, ZMD: Zombies of Mass Destruction, screened at the Austin Film Festival (AFF) in the Alamo Draft House. It was fantastic.

To watch our movie in that legendary theater—which celebrates so many of the films that inspired my own—was a night I’ll never forget. And the following weekend was one of the most exciting and fulfilling I experienced at any festival that year. From Ron Howard to Mike White, I got to meet my heroes, attend brilliant seminars, and partake in one of the most organized, enjoyable, and fun film events in the country.

My time at AFF was so inspirational that I immediately wrote my second feature based on my experiences there. Entitled JUNK (2012), my sophomore film centered on a struggling screenwriter at his first big film festival. My comedy satirizes the crazy and absurd world of the circuit while celebrating the life-changing experiences, encounters, and opportunities that come with it. Thus, deciding to premiere JUNK at AFF was a no-brainer. In addition to being one of the best festivals in the country, it’s also screenwriter-centric. Not only did AFF have the guts to program my comedy—which throws jabs at their industry—but they helped expose the film to a broad audience by packing the theater at every screening. And to top it all off, in the end JUNK took home the Best Narrative Feature Award!

AFF is a festival devoted to great movies and great screenwriters. They take chances on films that are ignored by other venues. They celebrate screenwriters, and award the industry’s best—from Eric Roth to David Chase. Filmmakers should be grateful for festivals like AFF. I certainly am. It changed my life, my career, and birthed my second feature. MM