Ghost Writing: Arnaud Desplechin on Ismael’s Ghosts‘ Film-Within-a-Film, His Director’s Cut, and His Fear of Rehearsals

French director Arnaud Desplechin’s charmingly self-referential body of work is an ode to the beautiful and often regrettable mishaps of youth, and how they reverberate throughout his characters’ lives.

In Desplechin’s cinematic universe, there are places (Tajikistan), characters (Paul Dédalus), and actors (Mathieu Amalric) that reappear, sometimes out of their original context, to create a link to what came before them. With Ismael’s Ghosts, which opened the 2017 Cannes Film Festival, the celebrated auteur once again confronts his protagonist with the past as he attempts to reshape his present.

To tell the story of a moviemaker for the first time, Desplechin cast Amalric as the titular character—a director in the process of a writing a screenplay while beginning to open up to a romantic relationship with Sylvia (Charlotte Gainsbourg). Shockingly, Carlotta, Ismael’s wife whom he presumed to be dead, reappears after 20 years and uproots his current life. At the same time that Ismael attempts to channel personal demons as he writes his espionage screenplay, a ghost from a time gone by materializes and transforms his existence into an unsolicited and problematic love triangle. Speaking with MovieMaker, Desplechin candidly discussed his creative process and the two cuts of Ismael’s Ghosts—one of which he thinks is “nonsense.” 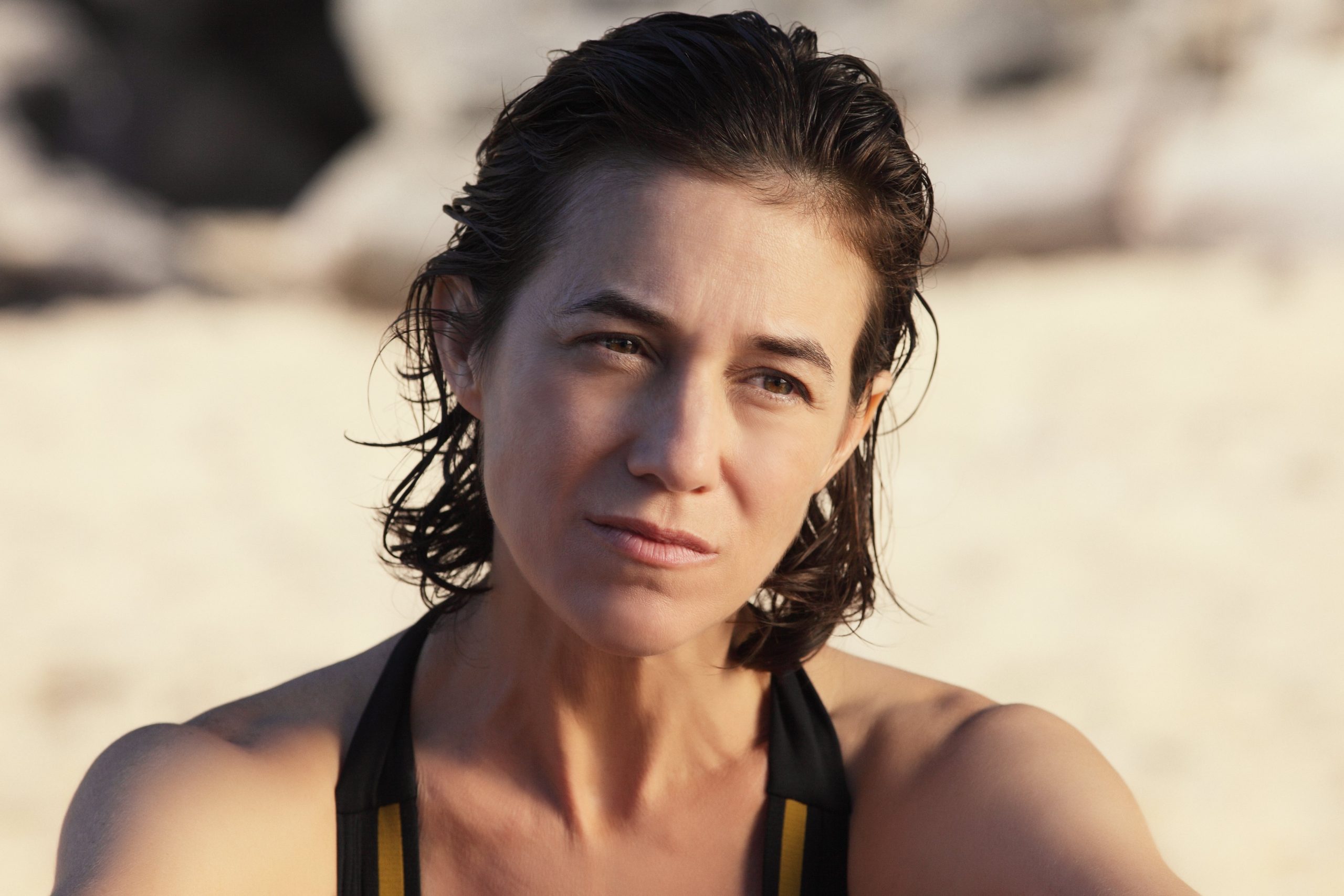 Carlos Aguilar, MovieMaker Magazine (MM): Tell me about the writing process. Was this a particularly difficult film to write? Although some of your other films have two parallel narratives, the construction of Ismael’s Ghosts is still rather unconventional.

Arnaud Desplechin (AD): I knew I had reached an age where I would love to depict, for once in my life, the character of a director, and that he would escape to the shooting. Telling bits and pieces of the life of a diplomat, you don’t know if the diplomat is a spy or not. That was my rough material, but I had no idea who this director was. I remember this moment one day so vividly, I came to the producer with one line of dialogue, “You have two women on the beach, and one of them says, ‘He doesn’t like to swim,’ and the other woman replies, ‘How do you know that?’ ‘Because I’m his wife.’” That was it. I had it. I had the fact that this guy is a widower, and the woman disappeared 20 years ago. He had started to have a new love, a second chance, but the second chance is suddenly ruined because the first wife reappears. And so, I knew why he escapes to the shooting sessions, because he can’t make a choice between these two women, so he’s trapped. That’s how we started this production, which was really complex, as you say, but thankfully I’m never working alone, so I worked with my two comrades, and we worked for years on this.

MM: Do you spend time writing dialogue separate from the time you spend on structure, or do those two components take shape at the same time?

AD: In my process of writing, a lot of scenes come from the dialogue. That’s mainly my way of working with Julie Peyr. When we are blocked on a scene, and I’m not making any progress on the narrative, then I improvise the dialogue. When I do this, I’m trying to find lines that surprise me. The co-writer is taking notes while I’m improvising the scene, and saying, “If he would say that, then she would say that, and she would say this.” During the evening, she types up what I improvised and sends it to me. I read the notes, thinking I’m a much better actor than what she wrote, I correct the lines, and that’s it. I can’t say that we wrote the plot first and then adapted it to the dialogue later. Instead, we started with dialogue, and try to figure out the motives behind the scenes.

MM: Did you conceive of Ismael’s fictional film first, or did that idea come after your main storyline was completed?

MM: How would you describe your collaboration with Mathieu Amalric on Ismael’s Ghosts as opposed to what you two have done together prior to this film?

AD: Stage fright. The fact that the first time you work with an actor you have to impress him or her, but when you work with someone who knows you by heart, it’s really difficult to impress him or her again. In a love story, to play the smart ass in front of a girl is easy the first day, but the second day, you start to be a bore, so you have to find new tricks and reinvent yourself. Mathieu really offered to me a sort of a culmination of all the work we already did together. I love particularly the fact that the character is so arrogant and so brash when he’s alone or when he’s with boys, but suddenly when he’s in front of Charlotte, you can discover another facet of shyness to his character. The fact that he be so aggressive and sometimes so gentle at the same time, made the character really moving. He’s burlesque, he’s absurd, and he is also moving, and I was really stunned by the performance.

MM: The conversations in the film feel incredibly natural. Is this the product of rehearsing with the three main actors?

AD: I never do rehearsals for several reasons: I am very superstitious. I’m terrified that if they are so good in rehearsals, they would be not as good during shooting, and we would regret it for the rest of our days. I’m so superstitious that I don’t allow myself to rehearse anything. I don’t like that. To me cinema is about reality; it’s about reinvention, on the stage, on the location, and to deconstruct it as we go from one take to another. Sometimes it’s simple, and we find it in two takes, and sometimes it takes 20 takes to find the truth of the scene, but this invention that we have together is without rehearsal.

MM: When Ismael’s Ghosts premiered at Cannes in 2017, there was a different cut. What changed?

AD: With the French producer and the French distributor we decided to do an edit I call the “French version,” which was shorter and afforded us one more screening each day. In France, we released the two versions at the same time, the art houses with the longer director’s cut, and in the big theaters we had the shorter French version. Unfortunately, Cannes went for the French version, which was absurd to me. But what can I say? Even with that version I was happy to be there, even if I prefer the longer director’s cut. I accepted it. That was it, so I’m so happy to see the whole film be released in the U.S. I’m really glad that Magnolia is doing that.

I remember, some American friends saw the two versions, and said to me in gently, “My dear Arnaud, in terms of storytelling, the French version is nonsense.” I agreed because in the French version, you never understand why the director is telling a story about his brother’s life. You also don’t have the trip to Tel Aviv, which is quite important to me.

MM: What is your idea of what a “ghost” is in the context of your work?

MM: All of your films appear to be about people’s relationships with their pasts, the present, and how they shape our lives, and especially about how we’re sometimes unable to let go of the past. Would you say you’re always dealing with ghosts in your work?

AD: I guess so, but I only realize it as you say it. I’m now thinking of my previous film, which is about the mix of the past and present, and the past that doesn’t pass, but is still vivid. The fact that you are still living with your past, and you have to move on. But what I love in Ismael’s Ghosts, is the fact that at the end of the process, they move on. Charlotte would love to be a spectator, and not to be a part of life but be on the sideline, so then she is pregnant. Ismael, who thought he was an absolute widower, and thought he would stay a widower for the rest of his days, moves on to another woman. The film is dealing with this very American concept of the second chance. Are you able to reinvent yourself as you are aging? In a way they reinvent themselves, and that’s what is great, the possibility to not be trapped in the past. MM

Outside In: Lynn Shelton and Jay Duplass on Rehearsals, Sex Scenes, What They Learned Working in TV, and More
So, You Want to Shoot in a War Zone? The Director of Scorched Earth Has Your Survival Guide