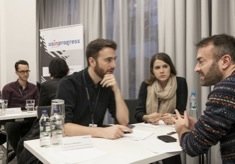 Last November, the second installment of the American Film Festival’s “US in Progress” (USiP) brought five unfinished American films to Wroclaw, Poland, where they competed (genially, of course) for marketing and finishing funds from a slew of European post-production and distribution outfits. Invitees to the 2012 festival fraternized with major distributors, including Canal+, Wild Bunch, and K5 International. Matt Porterfield’s I Used to be Darker (which premiered at this year’s Sundance Film Festival in the NEXT category) was awarded promotion and distribution support from Europa Distribution and the International Confederation of Art Cinemas (CICAE).

AFF’s USiP program is unique for at least three reasons. First, they look for unfinished films with potential, rather than completed, polished work. This opens up a window of exposure for a whole population of independent films struggling financially to wrap up post-production. Second, in addition to giving unfinished films a venue, they award each accepted project finishing funds. Some of last year’s films got sound mixing and subtitling, but Gregory Collins’s film A Song Still Inside won a full soundtrack from Polish composer Maciej Zielinski—worth $10,000. Third, USiP introduces selected filmmakers to a wide array of European buyers, all of whom are interested in emerging US talent.

Without a doubt, put AFF’s USiP on your calendar for next year. It’s 100 percent free to submit, and if you get accepted, they’ll fly you to Wroclaw and put you up in a gorgeous hotel. Literally, there’s no reason not to apply. One of the films they screened this year was just a 30-minute compilation of scenes, which means you don’t even have to be at the rough-cut stage to submit. And on top of all that, AFF itself is a top-notch festival. In addition to premium contemporary fare, they held a Wes Anderson retrospective. Just think: If you’d known about USiP, you could’ve been sipping vodka while watching The Life Aquatic in an historic, velvet-clad Polish theatre. That and meeting the reps from Canal+.