As if on a pilgrimage, scores of tourists and, on occasion, locals have taken advantage of a now-indispensable photo-op: the Urban Light sculpture in front of the Los Angeles County Museum of Art.

The enduing, simple allure of the sculpture—a forest of two-hundred-odd antique streeplamps at varying heights, restored and functional—has made it into a quintessential landmark, whether or not those who admire it know anything about the man behind them.

If they had discovered Chris Burden earlier, at the height of his career in performance art, they probably would not have envisioned that his interest on ephemeral and unrepeatable creations with his own body would evolve into what might seem as their complete opposite: permanent, large, public sculptures.

In the ’70s, the Boston-born, California-based performance artist was shot, nailed to a car and chained to the floor surrounded by electrically charged buckets of water; he was criticized, reviled, adored and praised for all of it. Provoking a reaction and inspiring fear, repulsion or anxiety in their viewers was the art itself. Violence became inextricably associated with Burden’s work, making detractors wonder if his intentions were merely masochistic.

Later in life, when documentary directors Tim Marrinan and Richard Dewey approached him, Burden had already undergone transition in the way he produced art. Although he’d always considered his performance art to be a stripped-down form of sculpture, eventually Burden would focus his efforts on tangible and massive pieces, like the one adorning the museum on Los Angeles’s Wilshire Boulevard.

In their appropriately titled feature doc debut, Burden, Marrinan and Dewey trace their subject from his rebellious origins up until his recent death at age 69. They piece together interviews with the man himself from across his career, and with the people in his periphery who experienced his most fiery side.

Carlos Aguilar, MovieMaker Magazine: What was about Chris Burden that you found particularly captivating, enough to make your first feature about him? When did your relationship originate?

Richard Dewey (RD): We approached Chris about writing an article for an art magazine. He agreed to it and we did it. Then we did a short film about his sculpture Beam Drop in Antwerp. That went well and I think we built some trust with him. We liked working with him and wanted to keep exploring his life and art. At that point in time, he was OK with us making a feature doc.

Tim Marrinan (TM): We thought there was a great story to tell about Chris. It was a bit of an untold story, really. There’d been articles about him and he was known in the art world, but he was probably under-known and there hadn’t been a film about him. We got interested in his work just because we were aware of some of the early performance works that he’d done. We were both living here in Los Angeles around the time that some of his later public sculptures were coming about, like Urban Lights at LACMA. Like a lot of people, we realized that he was the same person who made both of those works of art. We were interested in exploring that journey, and the more we got into researching Chris’ work, we saw that he made art that really provokes a reaction from people and that always pushed the limits of what’s possible. He had a lot of commitment to his art. He really put himself on the on the line for the art he was making.

MM: How did his unexpected passing affect the way shaped the documentary?

TM: His illness [melanoma] and his death came quite late in the process. It was big shock and it was unexpected. We started working with him before he was ill, so this was totally unexpected when we started the project with him. In terms of how it practically affected the film, it cut short our time with him a little bit. We were toward the end of the process but we had planned to spend some more time with him on camera. His passing limited us a little bit in that sense. Beyond that, it was something that reshaped our thinking about how the film would be structured, particularly the end of the film.

But it also made us very determined to have the film do justice to his body of work and the fascinating life that he had, and represent him in the right way. It pushed us to be a little more reliant on some of the archival interviews that we used. But actually I think that the limitation was probably a positive in the end, because talking to him later in his life about those early works, he was happy to talk about them. He stood behind those pieces and was happy to discuss them. There is something different about looking back that far with 30 or 40 years of hindsight. We found that when we unearthed some of those earlier interviews that he had done during the early ’70s, during that transition period when he was moving away from performance and into sculpture, it kind of made those time periods more immediate and gave the film more of a flavor for that time.

MM: From what we see in the film, it seemed that Burden was upset to know that most people continued to only associate him with [his 1971 performance piece] Shoot. Did he fear that one project would define him?

RD: I do think that that’s common in the arts—whether it be a band that has a great first record or an artist that has a [piece] like this that is so well known. It’s difficult. For a certain period of time, Chris struggled with that, but I think what he did and what our film tries to do is show that struggle and show how he ultimately got out from under the shadow of that one piece and built a legacy that is so much more than that one piece.

MM: Tell me about the division of labor or the work dynamic between the two of you as co-directors of a documentary feature.

RD: The project evolved over a lot years. Tim does more of the technical aspects and editing than I do, [but] we both really share the responsibilities on almost everything form shooting interviews, shooting events at museums, or sourcing archival material. I think had it been something that took place over nine months it may have been a little more about “you do this and I do this,” but it was over nine years working with Chris.

MM: Did Burden’s work and stylistic choices influence your filmmaking?

RD: Definitely. We took his art as a starting point for everything and how we thought stylistically about the film. It influenced how we thought about the graphics and how we presented his performances. His performances worked on two levels, maybe more. There are myths and stories about them, so we got people who were there at the performances and who could tell that story. [The pieces] also worked on this documentation level: You see photographs of the performances or the film piece. We wanted to present that way. Also, Chris was a guy who was patient and had a process, and we were also patient and had a process over those four or five years. We learned new things and discovered new bits of archival material. The film really benefited from that long gestation period and I think that’s very much in the same spirit of Chris’ sculptures.

MM: The only ways for those who were not present to know about his performances were the images captured during those pieces. What was his relationship to film and photography when it came to documenting his own work?

TM: He was very specific about his performance works. He deliberately didn’t have footage of a number of those performances. I think that the few images that survive of those that were disseminated to represent the piece were often just one or two black-and-white images, which are quite iconic and really transmit the idea of the piece in a very simple but powerful way. In talking to some of the other people in the film who knew him at that time, they said that that was deliberate on his part. He even said to us that sometimes he was resistant to having a piece filmed because if people looked at the video of a piece, they felt like they had actually experienced it, but they hadn’t. They had experienced a different thing. There were two different versions of these performances, one that involves discovering the performance via descriptions and through archival material, and the experience of actually being there when someone is about to have themselves shot or nail themselves to a car. For all of the performances, we had someone telling the story who was there, who was present as part of the piece or witnessing the piece, to try and give that vivid first-hand testimony of what that felt like, as well as using the documentation. 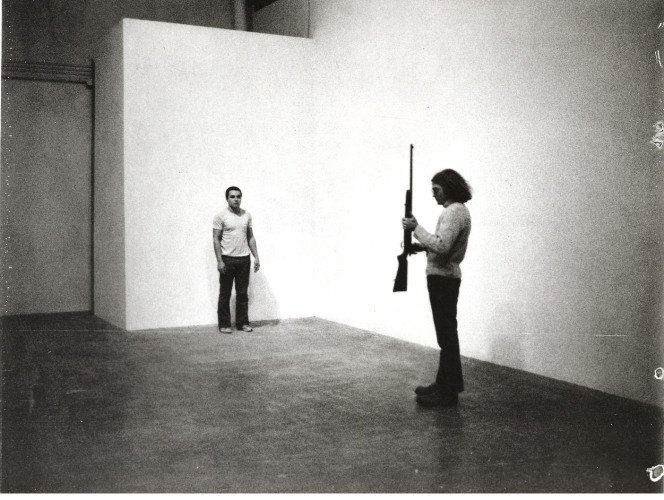 MM: The end of the film is marked by Chris Burden’s death, but prior to that, what did you believe would be the conclusion? How did you come to the realization that it was time to end a project you’d been working on for so long?

TM: That period of time goes all the way through that first article we wrote until the finished film, so in this feature documentary, it was about four years of shooting, and then the better part of another year on editing. His works took a long time to come about; it was a case of tracking them and checking in every few months and going and getting a bit more footage to show the development of the process. In terms of when you know when it’s done, the unexpected happened with this film, which did create a different kind of ending to the film with Chris becoming sick and passing away. We were following him through that, although that was around the time we were planning on wrapping up the film in any case. It all came together at that one point.

We were following that last piece that he created, Ode to Santos Dumont. We had filmed that being developed in his studio and in an airplane hangar that was being used to put together that piece. The timing worked out in a poignant way. We’d been working on that piece for a long time and it was only in the last period of his life that he perfected it to the point where he was happy with it. Ultimately that piece showed for the first time at LACMA just a few days after Chris passed away. That’s where the film ends of us.

That whole second half of the film, as we were tracking and following pieces that he was working on, that certainly was one of our questions as we were going along. His pieces take along time to come together and we were never really sure what the next one would be that would be finished or shown in a museum. We were keeping track of that and speaking with him and with the studio to figure out how exactly how that later stage of the film would work as we were making it. MM

Burden opened in theaters in New York on May 5, 2017 and in Los Angeles on May 12, 2017, courtesy of Magnolia Pictures. Top image photographed by Barbara Burden.